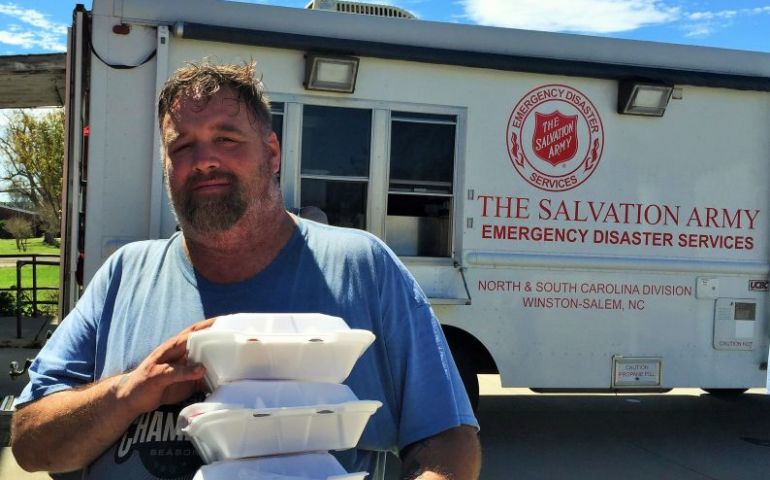 Morehead City, NC (September 18, 2018) – Before, during and after a disaster, The Salvation Army is there. In the immediate aftermath, The Salvation Army often serves at evacuation shelters. But, it also canvasses communities to find people in need of a meal and a kind word, wherever they may be. Many communities are still without electricity, and few stores have reopened.

On Tuesday, a mobile feeding kitchen stopped in several neighborhoods in Morehead City, NC, where the evidence of Florence was on full display. In many of these neighborhoods, trees poke through roofs, power lines dangle in the streets, and people congregate outside in hopes of catching a gentle breeze on a hot, sunny day.

The bad weather is long gone, but the disaster is only beginning.

Buck and her family live in one of these hard-hit neighborhoods that remain without power. She’s been without power for several days. As The Salvation Army “canteen” pulled into view, the line begins to form.

“This meal makes a big difference,” she said. “I don’t know what we’d do without The Salvation Army coming by daily. We have a few snacks, but they are bringing substantial food…something that will stick with you longer. We appreciate everything being done for us.”

Her house was destroyed, as was her aunt’s. In a way, she feels fortunate. “We’re struggling, but we’re making it,” she says with a smile. “We are just so glad to be alive. We are sticking in there.”

A couple miles over, Bruce Coolbeth stops to pick up lunch for his family and describes the challenges he’s facing.

“The house is a little damaged, but the power is what’s killing us,” Coolbeth said. “Without power, I’ve been unable to work. I can’t feed kids without money. I can do some, but not all.”

Local utility companies are telling residents power will be restored soon. Crews are working nonstop to see that happen. In fact, as of press time, the number of outages been reduced to around 31,000 or 53 percent of Carteret County.

And, residents like Jim Lowe are eager to see the lights come back on in his neighborhood.

“It’s been miserable,” he said. “Air conditioning, lights, you take it all for granted.”

Despite the hardships, this community is strong and resilient. Many locals echo the thoughts of Lowe: “I’m glad I making it through.”