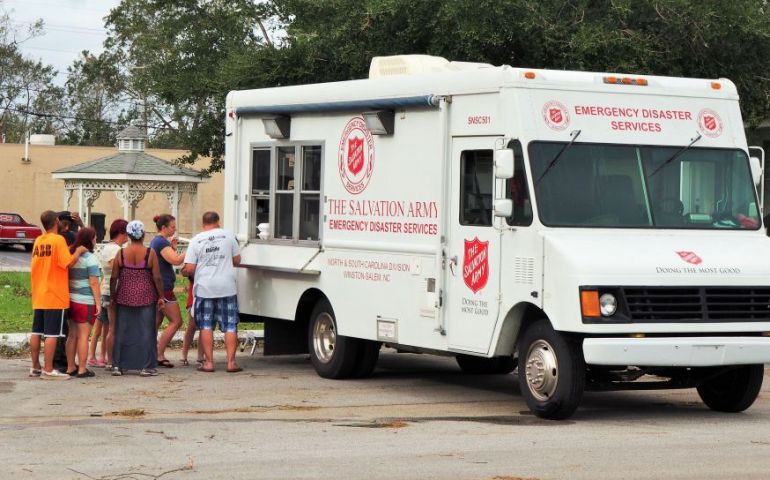 Newport, NC (September 17, 2018) – There’s one way to describe Newport, NC: a close-knit community. A town of about 5,000 in Carteret County, Newport endured some of the worst Hurricane Florence had to offer. Rainfall exceeds 25 inches in the county, causing historic flooding and widespread power outages. More than 80 percent of residents are still without power. Most stores remained closed.

Yet, the words you hear around town are most often words of thankfulness and concern for a neighbor.

At Newport Middle School, which has been set up as an evacuation shelter currently providing refuge for about 350, the words echoing the halls are “Thank you.” While eager to get back into their homes, people are appreciative of a place to find a hot meal, electricity and a kind word.

While serving at the shelter, The Salvation Army is also canvassing the surrounding area to find people in need of food and water.

“Thank God y’all are here, doing something for this community,” a gentleman named Alan said as he picked up a meal on Monday from a Salvation Army’s mobile feeding kitchen. The canteen and crew, from Winston-Salem, NC, had spent the day offering food and water to those in need in Morehead City and downtown Newport.

Several people visiting the mobile feeding kitchen in Newport were there on behalf of a neighbor. One man was getting a hot meal for his 83-year-old neighbor, who couldn’t leave after a tree fell through his house. Another woman was getting meals for a group of older women who were shut-in.

In Newport, everyone is looking out for each other. And, it’s not just because this community is in a state of emergency. It’s what they do every day.