Unable to Work but Able to Serve 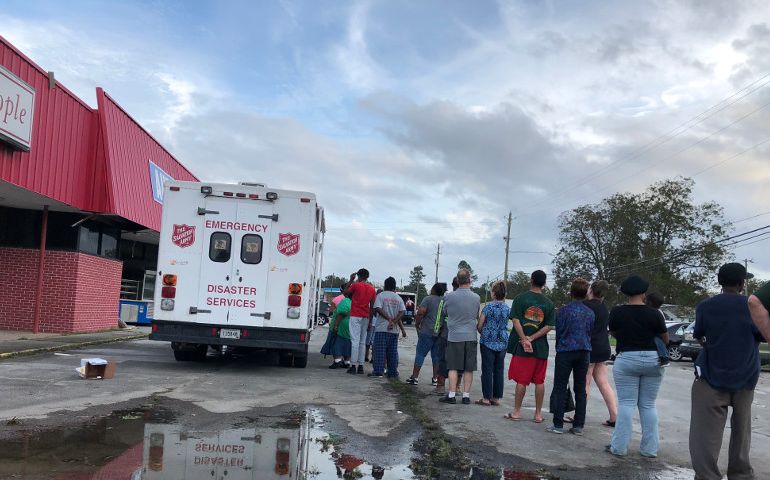 Washington, NC (September 18, 2018) - While many of us would welcome the opportunity for a day off, Edwina Barrera in Washington, N.C. kept on working even though Hurricane Florence forced her to take five days off at her usual place of employment, the highways that crisscross the southeast.

Before Hurricane Florence came to the coast of North Carolina Barrera sat behind the wheel of her tractor, hauling a trailer load for C.R. England. Reports on the what was then a category 4-5 storm reached the trucking company, so they urged drivers to head their rigs back to Smithfield Foods in Kinston to hunker for the storm. “I was thankful to get home Tuesday before we got flooded,” said Barrera. There was some relief when the hurricane’s strength was decreasing as it made landfall in North Carolina on Thursday, but the rains overwhelmed the Neuse River and smaller creeks. Kinston quickly flooded, as did the lot where Barrera’s tractor was waiting out the storm.

“I was devastated because I couldn't work,” said Barrera. “If the wheels don’t go, I don’t get paid.” A flooded truck lot, impassable roads, and closed schools meant this soldier of The Salvation Army Washington Corps couldn’t just sit home and wait. “I had to do something for these families who were suffering.” She pulled her Salvation Army soldier’s uniform out of the closet and headed to the Corps. She joined the rest of the crew to board the Washington Corps canteen that was headed 45 miles east to Scranton. Located at sea level on the Pungo River, Scranton experienced significant flooding and lost power, meaning people were hungry and needed a helping hand.

“We fed 101 people lunch today and they were so thankful and appreciative,” said Barrera. “Living so close to the water meant they have been through this before, but extending them some hope after this storm helps them to see the light.” Her truck remained in the lot again on Tuesday, so she was back on the road with The Salvation Army mobile feeding unit. While serving lunch she received an alert that her truck was ready to go. By nightfall, she headed to Newport News, Virginia, with her next load.

“I am sorry not to get paid from my job, but serving them the first hot meal they’ve seen in several days and seeing them smile makes volunteering worth it!”