It's My Turn to Help 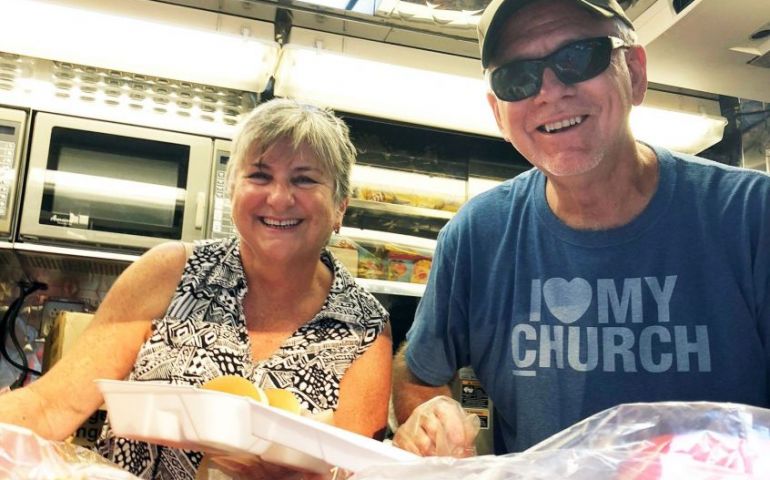 Washington, NC (September 20, 2018) -- All it took for Bill Lennartz to step into action was for Pastor Carl Perry to make an announcement at church about setting up a hurricane relief program. “I love helping. I love service. I think my spiritual gift is service,” said Lennartz who lives in Chocowinity. The Washington Campus of The Covenant Church is just about 400 yards from The Salvation Army of Washington, N.C. Corps building, but this is the first time the groups worked together. Pastor Perry and Lieutenant Karl Bush did the necessary paperwork to get Covenant Church volunteers ready to help once the storm made landfall.

“The reputation of The Salvation Army is great. They have such a large capacity to serve and are already doing great stuff,” said Pastor Carl Perry from Covenant Church Washington Campus. “There’s no sense in recreating the wheel. We wanted to be part of it.” The Church set up teams of volunteers serving the community throughout the day with three teams assisting The Salvation Army with feeding and logistical work, and another three teams helping with other projects in Washington.

We caught up with Lennartz in Aurora, NC, where he was serving barbecue sandwiches, three-bean salad, and applesauce from the Washington Salvation Army mobile feeding unit to 450 individuals. Other Salvation Army vehicles were nearby with cold drinks, water, and snacks. Working alongside Bill was fellow church member Kay Westbrook who with her husband Dewayne had served lunch in Aurora earlier that day. In addition to sharing his story on how he came to be standing in the truck passing food containers through a small window, Lennartz reminded Westbrook how they met one another. “We went to the same church, but it wasn’t until Hurricane Irene hit in 2011 that we became friends,” explained Lennartz. Westbrook grew up in the Aurora area and moved back here with her husband in 2010. Westbrook recounted how during Hurricane Irene she lost her entire house. A 50-person team from Covenant Church helped clean the Westbrook’s home and salvage what items were left.

In this storm, she was spared. There was a little flooding, and shingles and siding blew off. “It’s an answer to prayer that it wasn’t any worse than it was,” said Westbrook.

As the canteen volunteers were packing up, Lennartz reflected on the day, “We hope that we’re reflecting Jesus and what He would have us do. It turned out that the hurricane didn’t affect my area too badly, but in doing so it turned away from me and affected others. It’s my turn to help.”