Serving More Than a Meal at Tommy's Road Elementary 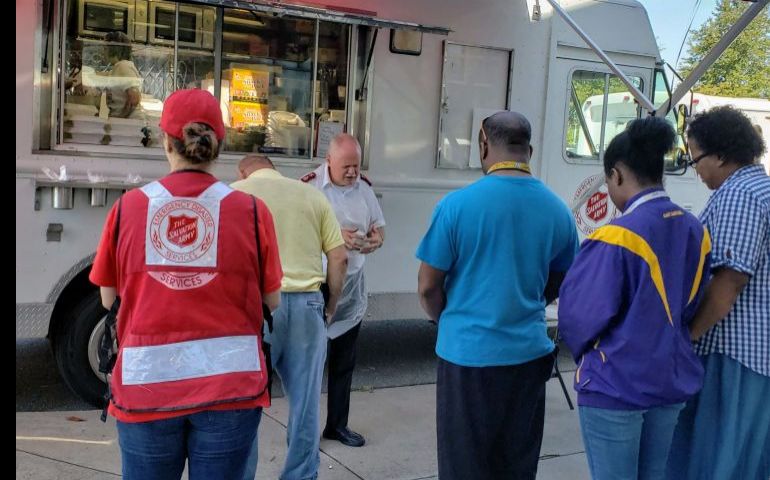 Goldsboro, N.C. (September 21, 2018)--The Fairfax Virginia mobile feeding unit (canteen) was a fixture at Tommy’s Road Elementary at the request of Wayne County. For several days after Hurricane Florence, three meals a day were served to people who were unable to go back to their homes because of massive flooding in the area.

The crew serving on the canteen came to know the stories of several of the shelter residents.   Major Donald Wilson, from Fairfax, and Captain Shrikant Bhatnagar, from the District of Columbia, were able to provide food for the body and soul.   One couple, who were displaced for several days, asked them to pray for them.  After the prayer, they shared how much of an impact The Salvation Army had made by sharing warm meals, heartfelt concern and smiles.

Devotions were offered daily to those who wanted to attend as well as prayer before serving every meal.  One of the school cafeteria ladies stopped in to see how things were going one afternoon.  While there she shared how she was taking her husband for treatment after a surgery.  Captain Bhatnagar was able to pray with her and her husband.

And yet in another instance, while going to a local grocery store to purchase needed supplies, a manager stepped in to pay the taxes.  After saying thank you, Major Wilson was able to listen to the manager’s story on how Hurricane Florence had affected their family as well as some of the others.   The shopping trip resulted in being able to pray with the store managers for their families.

As Major Wilson stated, “Sometimes when you can just be still and listen, it is what is needed most by the person speaking and it provides an opportunity to provide emotional and spiritual care at their time of need."