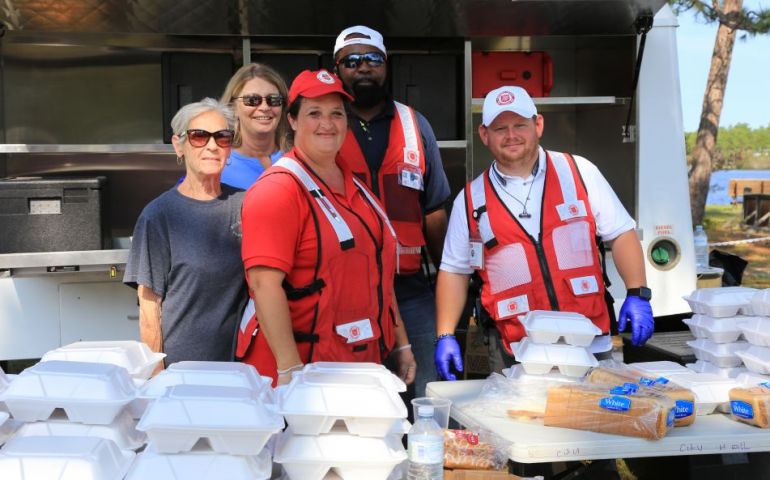 Written from their perspective.

“We never thought it would get this horrific. In the 25 years we have lived in Boiling Springs Lake, we’ve never seen anything like this. We’ve experienced several hurricanes and would lose power for up to 3 days, but then it would be restored. Currently, power in this area, has been down for 9 days. Many residents are still in need of water. Some of us were lucky enough to have running water on the 6th day, and finally be able to shower. We haven’t been notified that the water isn’t safe to drink, but we’re being cautious with our intake.

Though we suffered no damage in our homes, most of our neighbors have been tremendously affected. It breaks our hearts to see our friends, especially those living in mobile homes, lose everything.  Some of them, due to lack of resources, couldn’t evacuate and witnessed their homes being torn apart.

We did not receive signals on our phones until the 6th day. One of the first calls we received was from our supervisor at Parks and Recreations. She said, ‘the police and fire department need help serving food at Spring Lake Park,’ and that was when we met The Salvation Army mobile kitchen crew. We knew they were here to help, and they understood the communities need. They’ve brought fresh water and premade BBQ meals.

We’ve volunteered with this crew for 3 days now. We have noticed that as survivors walk up to the canteen they start crying and hugging us because they haven’t had a decent meal in days. This crew has been a blessing to our community, and we’ve fallen in love with the way they treat people and work together. With their smiles and bubbly personalities, they’ve helped turn a bad situation into something good. They make us laugh and help us forget our tragedy, if even just for a few hours. Several people have inquired as to how long the Salvation Army will be serving food, and they always respond, ‘we’ll be here until the food runs out.’ Sometimes that means until late at night. We don’t plan to separate from the team, we’re stuck to them like glue. They’ve been an encouragement to our community and we are grateful for their service.”

Power is returning quickly and recovery in Wilmington, NC is advancing. However, outlying areas are further behind. The Salvation Army has served the Cape Fear region with approximately 50,000 meals and 30,000 drinks, 12,000 snacks, 45 cleaning supplies, 146 food boxes, and the Spiritual and Emotional Care Specialist have had contact with approximately 3,000 people.