From Little To Less...Recovering From Florence 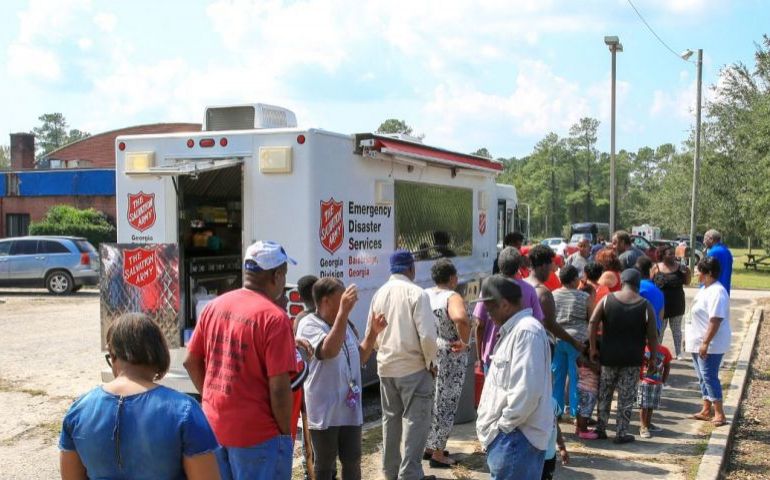 Lumberton, NC (September 25, 2018)  – Already struggling neighborhoods face an uncertain future with even less. The floodwaters from Hurricane Florence’s slow trail dropped enough rain for the Lumber River to reach near-record flood levels.  Lumber River and its tributaries topped their banks spilling murky water across much of the area—ravaging homes, businesses, places of worship, and leaving its mark on thousands of lives.

“When you don’t have much, anything you lose is too much,” said Lilly Rose as she stood in line for a hot meal from The Salvation Army’s canteen (mobile kitchen).  Rose went on, “You’re like a God-send to us here.”

“We’re not LIKE a God-send, we ARE a God-send, sent and directed by God” replied Captain Rick Boone.  “But I know what you mean, thank you,” he quickly added with a smile.   Boone arrived in Lumberton today from Knoxville, Tennessee as part of the reinforcements sent to expand service throughout Robeson County.  Boone immediately went to work on a canteen, roving neighborhoods where the water had receded enough to return.

Rose shared that the water got into her home, but not to the second floor where she and her grandson waited safely for the water to retreat.  “I know it may not seem like much to others, but to us, it’s a lot,” Rose said.   “We’re glad we’re safe, and everyone we know made it.”  With Florence's death toll topping 30, this is an important reminder.

“As sad as I am about what we lost, my job keeps me up at night,” Rose said, “The store where I work flooded and the owner told me not to come in.  I’m not sure when or even if it will open back up.”  The loss of income compounds the loss of property, punctuated with the loss of tokens of the past—memories of family trips and loved ones.

“We’re safe and you’ve given us a delicious meal, we’re going to be OK,” Rose said to Boone.  “God Loves you and as His children, so do we,” Boone replied.  After a short prayer, they parted, Rose to her dark, wet home and Boone to deliver a meal to another hurting neighbor Rose was worried about.

“God is good, even when we don’t understand His plan,” Boone is overheard saying as the door closed.  And, of course, he’s right.  The Salvation Army’s mission is to “meet human need in His name without discrimination,” and seldom is that more evident than in times of disaster.