And In The End---Give Thanks 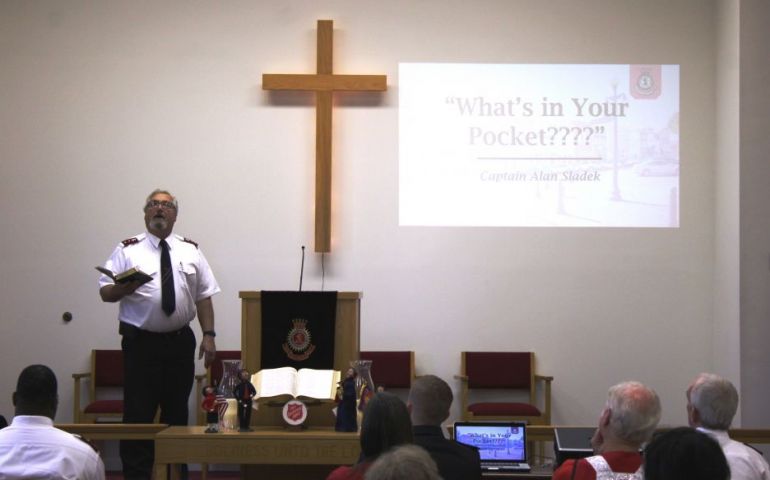 Georgetown, SC (September 30,2018) It’s been three weeks since Sunday worship services were held in the chapel of the Georgetown Corps of The Salvation Army. Hurricane Florence had turned the Corps building into an Emergency Disaster Services Incident Command Post. Normal programs were suspended as Mobile Feeding Unit (Canteen) teams and Salvation Army personnel descended on this small city nestled between Myrtle Beach and Charleston and prepared for the threat of the oncoming storm.

With a smile that revealed his exhaustion, Corps Officer Capt.Tim Scott described the stress everyone in the area had gone through, “First we were gonna die in the hurricane, then we weren’t. Then we were gonna drown in the flooding, then we weren’t. No one knew how to react.” In a case of preparing for the worst but hoping for the best, countless prayers were answered and the hurricane turned north, the rivers barely overtopped their banks, the deluge was avoided.

That doesn’t mean great need wasn’t evident. Some 15,000 meals were served to first responders and residents who had evacuated to shelters in advance of the storm and predicted floods. But little or no damage occurred and survivors returned to find their homes intact. The thousand first responders dispersed to the various cities across South Carolina from which they had been deployed. Life began to return to normal. The story of Hurricane Florence in Georgetown came to a conclusion.

So on the last Sunday of the month, services returned to the chapel of the Georgetown Corps. The regular congregation was joined by The Salvation Army officers, employees and volunteers whose Emergency Disaster Service assignments had brought them here. They gathered to pray, to sing, to rejoice in their good fortune and to remember those in other locations who had not fared so well. They were there because, in the words of Incident Commander Capt. Kenny Igleheart, “This is what it’s all about.” Weeks of fear and trepidation had been replaced by a time to give thanks.