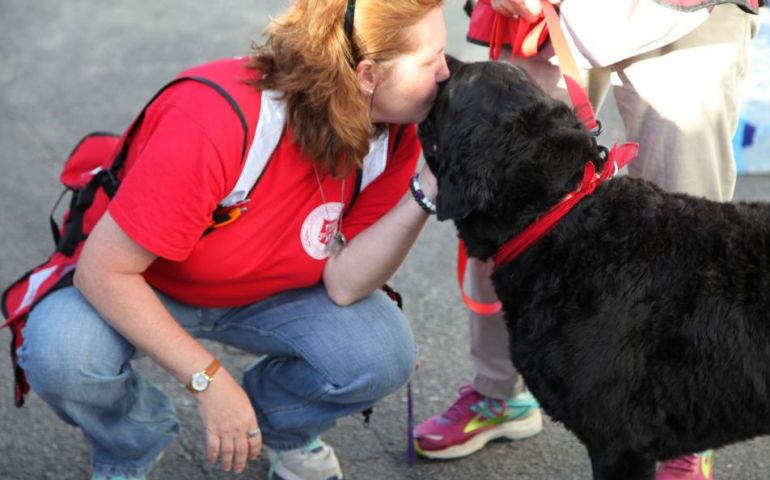 Wilmington, NC (October 3, 2018) – The Salvation Army has responded to every major disaster in the United States since the hurricane that devastated Galveston, Texas in 1900. For the first time in this long history of disaster response, The Salvation Army has partnered with Therapy Dogs International to work alongside them in relief efforts.

Therapy Dogs International (TDI) is a volunteer organization dedicated to helping handlers through the registration process to get therapy dogs to wherever they’re needed most. From nursing homes to hospitals, and now disaster relief sites like The Salvation Army’s response to Hurricane Florence in Wilmington, North Carolina, you can find them providing comfort and care.

If you followed Jazz, a Goldendoodle, around for a day, you may find him with his head in the lap of a little girl reading him a book while she waits on her mother to go through the government assistance application process. This process could sometimes take several hours due to the volume of need. “I couldn’t believe the magnitude of people impacted by Hurricane Florence,” says Debbie Willis, Jazz’s handler. “It does our hearts good to see our dogs making someone feel better, especially the children going through this.”

Wally, a Long-haired Labrador retriever, could be found sitting with a Salvation Army volunteer while she absently stroked his head as she processed her day. A day spent driving out to rural areas to serve meals to hundreds of people who had lost so much from the storm.

“The therapy dogs add another level to our emotional and spiritual care efforts. It’s another connection we’re making with people that have just experienced trauma,” says Kevin Chinault, Emotional and Spiritual Care Officer for The Salvation Army’s Hurricane Florence response in the Wilmington area. “Even when people won’t talk, they’ll connect. The therapy dogs are truly helping us provide the much-needed ministry of presence.”

“Some of these people were in need before the hurricane, and now they’re going through the heightened stress of a disaster,” says Jane Willis, Wally’s handler. “They don’t think something as simple as a dog can make them feel better, but the unconditional love of a dog that doesn’t want anything back from you helps release some of that stress, and it makes a big difference.”

Jane remembers a woman coming up to Wally and starting to cry as she hugged him. “She didn’t say much of anything, but she was able to find some release and comfort in him.”

A typical disaster deployment with The Salvation Army lasts 14 days, and though the work is rewarding, it can be difficult. “The therapy dogs accomplish as much with the staff and volunteers as they do with the people that have gone through the disaster,” says Steven Hartsook, Incident Commander for The Salvation Army’s response in Wilmington. “They’ve had a big impact on us, especially when we’re missing home. They help us care for our team and give a little bit of respite so that we can continue working and caring for others.”

This being her first deployment with The Salvation Army, Jane has been very impressed with the instant acceptance and organization. “You’ve got so many people that don’t know each other coming in to help,” she says. “During devotions the other day they shared Romans 12, which talks about the body of Christ and everyone doing their part to make the body function. I can see that happening here, and I have very much enjoyed the relationship we’ve built.”

Therapy Dogs International – especially Debbie, Jazz, Jane and Wally – are now a part of the body that comes together with The Salvation Army to meet needs after disasters strike.

“A body is made up of many parts, and each of them has its own use. That’s how it is with us. There are many of us, but we each are part of the body of Christ, as well as part of one another.” Romans 12:4-5