Planting Seeds of Hope on the Frontlines in Tallahassee 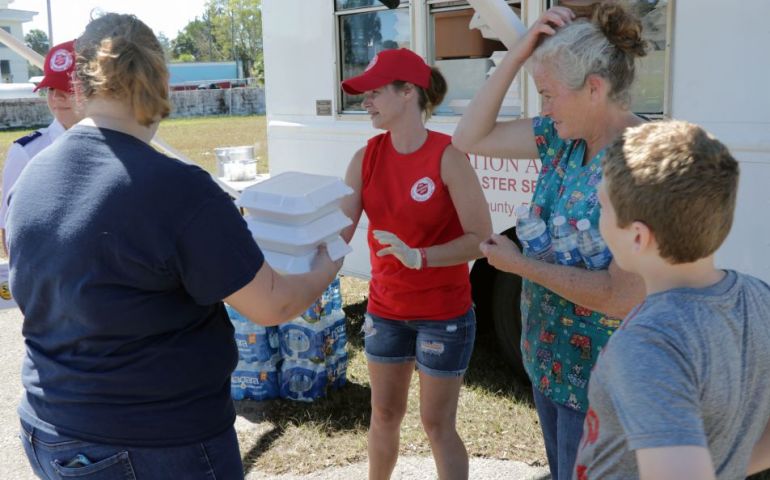 Tallahassee, FL (October 15, 2018) - When disaster strikes, mobile feeding kitchen (canteen) crew members are at the forefront of The Salvation Army’s emergency response offering meals, refreshments, and emotional and spiritual care to rescue workers and survivors. From enduring extreme weather conditions to extensive hours of service, a canteen crew member must have patience, heartiness, and compassion to serve others.

30-year-old Kayla Titchenell is a canteen crew member providing disaster services for Gadsden County, where 40,000 people are still without power.

Kayla eventually moved to Lakeland, Florida and briefly stayed in The Salvation Army's shelter with her then one-year old son Elijah until she secured a part-time job at Publix. The corporate Angel Tree hosted by Publix was just the beginning of Kayla's journey to give back to people in need through The Salvation Army.

Kayla diligently volunteered with the Angel Tree program for three years and just two weeks ago became the Special Events Coordinator for The Salvation Army in Lakeland. Now, Kayla and countless Salvation Army colleagues and volunteers from all over the country are serving on the frontlines in the Florida Panhandle to provide relief for families displaced by Hurricane Michael.

“In times of crisis, people wonder if anyone cares what they are going through. The existence of canteen crews demonstrates that someone cares. They give up their time to alleviate suffering and it takes a special kind of person to make that happen,” says Major Ed Binnix, Incident Commander of The Salvation Army’s emergency response in Tallahassee.

“If it wasn’t for The Salvation Army, I wouldn’t have gotten anything for Christmas. And now that I work for the same organization that gave me so much as a child, it feels amazing,” says Kayla. Her unwavering commitment to serving the community is a prime example of The Salvation Army’s ministry: planting a seed of faith in people that have lost hope.

From providing emergency response to survivors of a disaster, to spreading Christmas cheer to a low-income family, The Salvation Army is committed to meeting human needs all year long.