The Salvation Army: It’s About Others in Blakely, GA 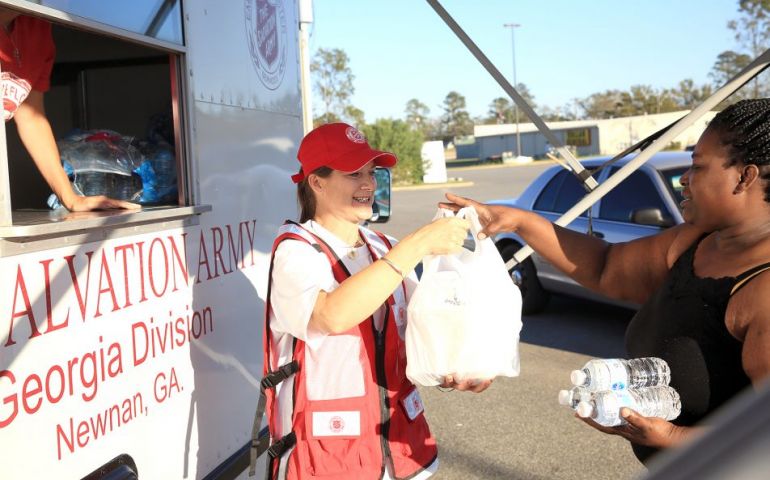 BLAKELY, GEORGIA (October 15, 2018) — The year was 1993, and one of the most devastating hurricanes to hit the U.S. had just laid waste to south Florida and the Keys. Steve and Karen West stood outside their now-demolished Miami home realizing life as they had known it was gone. Hurricane Andrew cut a swath of devastation and harsh reality across the lives of millions of people. As Steve looked around, he noticed a Salvation Army truck serving food in the area and started to walk toward it.

“I remember it like yesterday,” says Steve. “What a great sight to see. I thought, ‘how wonderful it was that someone was thinking to do something like this, at a time like this, for us.’”

The devastation to their home motivated Steve to take another job with his employer, Delta Airlines, in Atlanta, Georgia. Life went on for Steve and Karen; their children grew up, graduated from college and got married. But, Steve never forgot that Salvation Army truck and the kindness of people he did not know who would brave the dangers of a disaster zone to venture out to help those in need. Back in those days, Steve had many good words for those Salvation Army people.

Today, on one of the few main street corners in Blakely, Georgia, sits another Salvation Army truck parked in a convenient corner of a large store parking lot. Most of the electricity in the small southwestern Georgia town is out. Just a few days before, Hurricane Michael, the most powerful hurricane to hit the U.S., had devastated the Florida panhandle with such force it was almost classified a category-five hurricane. The hurricane’s massive impact carried through Florida, into South Georgia and eventually over the little town of Blakely with the rage of a category-three hurricane.

Streams of people approach The Salvation Army canteen (a mobile feeding unit) in the parking lot corner to get warm meals and drinks in quantities sufficient for their families. Words of kind appreciation mixed with stories of hardship and worry fill the air.

“I came down here to help my 93-year-old grandmother,” says a woman carrying away a stack of prepared meals and a bag of drinks. “Our electricity is out and these meals are a God-send. Bless you.”

Christine Drought stands outside the window of the canteen fully decked in red and white Salvation Army regalia handing out meals and drinks with a bright, friendly smile as fast as Trish Francis, inside the canteen, can hand them to her through the window. Christine and Trish are part of the Newnan, Georgia crew and have worked together on many disaster teams. They love what they do and they are extremely good at it.

“Our house is Okay,” says another woman, “But, we don’t have electricity, so the food in the refrigerator is now bad.” Adding somberly, “And we lost five acres of timber.”

The man in line behind her listens in and interjects, “You don’t know how fortunate you are to have electricity, water and food until you don’t have it.”

“We prepared for a storm,” says another woman in line, “But, not this! Who would have thought a category-three hurricane would come through Blakely.”

“I used to be just like them,” whispers a man standing off to the side from behind a well-trimmed white mustache, “I know exactly what they are going through, and that’s why I’m here.”

Now retired from Delta Airlines, Steve never forgot the goodness he found with The Salvation Army, and he, along with his wife, Karen, wanted to be part of that good work. She’s a vital part of the Newnan, Georgia team – right there in the canteen next to Trish, handing out meals to Christine.

“I love what The Salvation Army stands for,” says Steve. “Doing the most good. That about sums it up.”

Steve and his dedicated, hard-working Newnan crew love serving together as a well-knit team. But, they will be the first to tell you it’s not about them – it’s about others. It’s about bringing hope and help to those people standing in line in front of their Newnan canteen full of worry and doubt about what the future holds.

“It’s all about serving others in their time of need,” says Steve. “I know, because I’ve been there.”