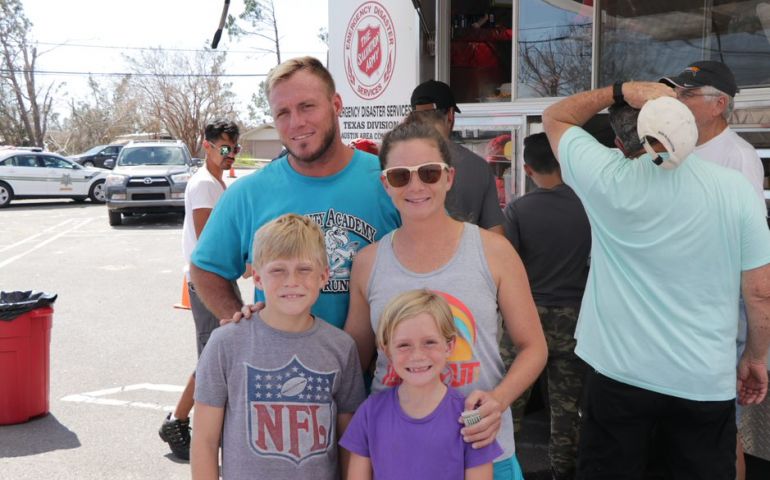 Lynn Haven, FL (October 16, 2018) - The Wallace family had never asked for a meal from The Salvation Army before, not even during previous hurricanes. But today the family of four needed a break from cooking on their propane stove and decided to stop by one of the more than 24 canteens (mobile feeding units) serving the Panama City area.

“We were driving by and thought it might be nice to not have to cook at least one meal,” says Lindsey Wallace. “We appreciate The Salvation Army more than anything, just to help lift the burden off our shoulders even just a little bit. We’re very thankful.”

Lindsey says she and her husband Chad decided to ride out Hurricane Michael with their two children in their Lynn Haven home, a home they built together, filled with too many memories to walk away from. “We really didn’t think the storm would be that bad and if we did sustain damage, I wanted to be here in case something bad happened,” she says.

The Wallace’s fared better than most of their neighbors; many who lost nearly everything. But through it all, she says, the family managed to make it to the other side of the storm unscathed.

“Other than a little crying during the storm and fear about what was happening outside, my kids were remarkably strong,” says Lindsey. Her husband Chad agreed, saying his only regret was not sending his wife and children out of harm’s way. However, he says Hurricane Michael is teaching his children a very valuable lesson, one that they can’t learn from a book even though he and his wife are teachers. “This really isn’t a lesson about survival; rather it’s a lesson about kindness and about how important it is to help each other in times of tragedy, exactly what The Salvation Army is doing.”