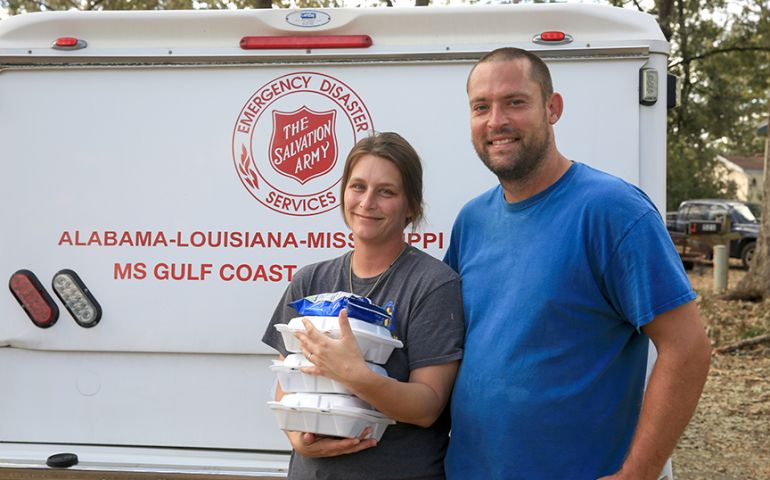 ALBANY, GA (October 17, 2018)— A week after Hurricane Michael swept through the Peach State with the force of a category-three hurricane, the South Georgia landscape is still awash in a sea of toppled trees and littered debris. The harvest-ready cotton fields that dot the southern region are scattered to the wind, blown away like a tornado focused on a dandelion. Farmers quickly try to salvage what is left, leaving large, white circular bales wrapped round with pink and yellow plastic scattered across the plains.

Earlier, dedicated emergency crews from the north, east and west rallied to work feverishly in the hardest-hit South Georgia regions to restore power and free trapped residents as quickly and safely as possible. But, Hurricane Michael took a powerful upper-cut punch to South Georgia and the devastation is spread wide and far. It will take months to get back to any semblance of normalcy. In some cases, things will never return to the way they were before the ravaging storm stuck.

The panorama of tragic scenery is an abrupt contradiction to the calm, brilliant sunny days that often follow a hurricane.

It was on such a day, five days after Hurricane Michael struck, that Terry Lightheart, a mother to three grown children and three still at home, was driving northwest on highway 82 north of Albany, Georgia when her eyes were drawn like a magnet to an odd and dire sight 100 yards to the east a few miles outside of town. A nameless enclave of 60 thin-walled trailer-homes lay mangled by large, toppled pine and live oak trees like soda cans crushed underfoot.

In the buzz and chaos of disaster activity in the surrounding cities and counties, it was eerily quiet here — a little island of destruction secluded all by itself. No bulldozers or backhoes removing trees, no large bucket trucks restoring power, and no emergency vehicles accompanied by personnel directing traffic were on scene. There was only a little movement here and there as lonely residents braved to come out and face the massive destruction that was now their corral.

Moved by compassion for what Terry could only imagine would be found in the rubble, she resolved to find a way to bring hope and help these unnoted people.

And she was just the person to do it.

Terry was there, in Albany, Georgia, on a two-week assignment as the Planning Chief for The Salvation Army’s Hurricane Michael Emergency Disaster Incident Management Team. Her compassion for people is one of the reasons Terry does what she does so well. She is in Georgia to help people in need alongside The Salvation Army of Georgia. But, in her normal job, Terry serves as the Emergency Services Director for the entire Salvation Army Alabama-Louisiana-Mississippi Division (ALM).

Years of training and purposeful mission have honed Terry’s skills and given her a sixth-sense of what to do to help people in their time of need. She turns back to the disaster response Incident Command located at The Salvation Army’s Albany, Georgia Corps chapel, where she marshals the needed support and resources and alerts others to the small community’s plight.

Terry is soon back on the road in her Salvation Army branded Toyota Tundra V-8 SR5 and headed to help the people in the trailer enclave. Following Terry, in an ALM catering truck loaded with food and drinks, are Tyler Hicks and Shyan Campfield, a young couple who attend The Salvation Army’s Church in Pascagoula, Mississippi. Tyler and Shyan first met at The Salvation Army’s Camp Hidden Lake in Mississippi, and have been dating for two years. This is their first time helping people during a disaster and they are excited to put their faith in action.

As the two-car caravan pulls into their destination, they are met by a car going the other way. The man inside looks suspiciously at the well-meaning intruders. “Hi!” says, Terry cheerfully. “We’re here to see if you need any food and water.”

“Oh, that would be terrific!” the man says. “We thought we were all alone – nobody has been out here to help us. There are people in here who could really use some food.”

Terry, Tyler and Shyan slowly make their way up the little dirt road that meanders throughout the complex past trailer after trailer crushed by massive trees. They stop by a trailer where Destiny, age five, and her brother, Destin, age eight, are playing. Their Aunt, Brandi Robinson, watches from the trailer steps.

”Hi! Do you need any food?” asks Terry with a smile.

Brandi walks over and slowly warms to the new, friendly visitors. “Sure – that would be great,” she says without a smile. “We’re all just coming back to find all this,” she says. “Thankfully most folks waited out the storm elsewhere and the few that remained are safe. It’s a miracle that nobody was killed. We’re just trying to make sense of all this.”

Tyler and Shyan package enough meals for Brandi, Destiny and Devin, and additionally for Brandi’s sister and husband – the children’s parents. They have all moved into Brandi’s sister’s undamaged trailer right in front of the catering truck. Brandi’s trailer, the yellow one second from the entrance of the enclave, is a total loss – crushed under a massive pine tree. A small American flag proudly stands straight at the side of their mailbox — now dented to half its height by a branch from the pine tree.

A little girl in flip-flops decorated with colored strands and a few rhinestones walks up to the catering truck. “Do you have hot dogs?” she cheerfully asks. She lives in the trailer right beside Brandi’s sister. Soon Terry is talking with her parents who have made their way to the truck – now a centralized gathering place.

“We’re so glad to see you here,” says Cliff Sanspree. “We thought we were on our own. Nobody has come out to help us.” Cliff’s house was not damaged, but a large pine tree fell on his new Ford truck. “It’s a mess,” Cliff says, shaking his head. “We took in one of our neighbors who has a bad leg. Can we get a meal for him, too?” he asks.

A young man drives up on a trail-weary, red four-wheeler. “There’s an elderly house-bound couple around the corner. Can I take them some meals?” Tyler and Shyan spring into action and he is soon off on his delivery run.

Another man gratefully reflects as he picks up a meal and something to drink, “I thought we were alone, but now we have hope. It’s good to see there are good people in this world.”

By the next day, electric crews had dropped off a few caissons loaded with telephone poles, and the future for the little trailer-home enclave began to look brighter.

And for Terry, Tyler and Shyan, the people who were nameless, unidentifiable and in much need just a short time ago, are no longer so. Now, they are people they know, and will never forget.