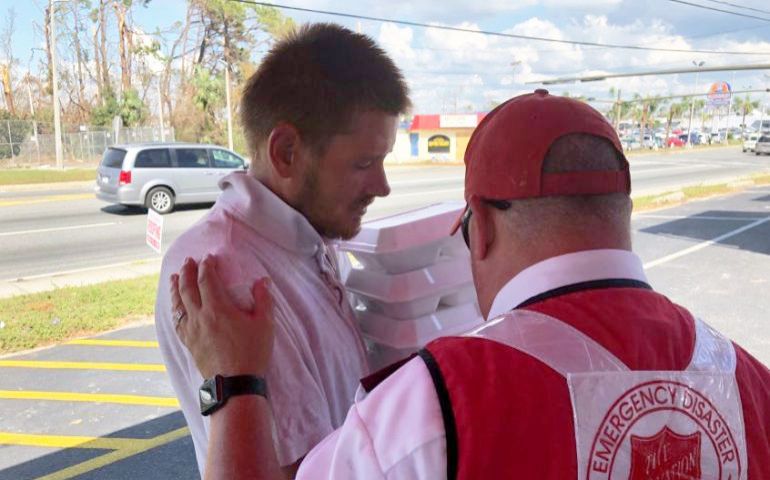 Panama City, FL (October 17, 2018) - “This was unlike anything I’ve ever experienced before,” says Brian Headley as he ventured out of his trailer park to brave the midday heat and grab some food and water from a Salvation Army canteen (Mobile Feeding Unit) parked nearby.

The life-long resident of Panama City lives in a mobile home with his sister, mother and grandmother; the family was one of the few who remained as Hurricane Michael brought total devastation to the area, including to many of his neighbors.

“Most of those homes were destroyed and are now uninhabitable. Ours had some windows knocked out and the roof leaks a bit, but we’re able to hold up in there for now.” Headley admits he and his family will likely have to move from Panama City because of the damage, but this experience has forever changed him. "God spared us for a reason. It’s going to change the way I look at life, I won’t take things for granted anymore; I’ll be a better person to my family, work harder.”

Major Ken Fagan, Administrator for The Salvation Army in Citrus County, Florida, takes the time to speak with survivors, asking how they are emotionally and making sure they have contacted FEMA for assistance. He is one of the Emotional and Spiritual Care Officers assigned to the nearly 25 mobile feeding units in the Panama City area. “Recovery isn’t just about providing a hot meal or replacing things, it’s about people's emotions and their spiritual place in life; just giving them the opportunity to talk about that.”

After a brief conversation, and with food in hand, Headley gratefully accepts Major Fagan’s offer to pray with him. “Having The Salvation Army out here gives me hope. It means I know I won’t go hungry and it has strengthened my faith. I really appreciated the prayer and comfort, I needed it, everybody needs it.”