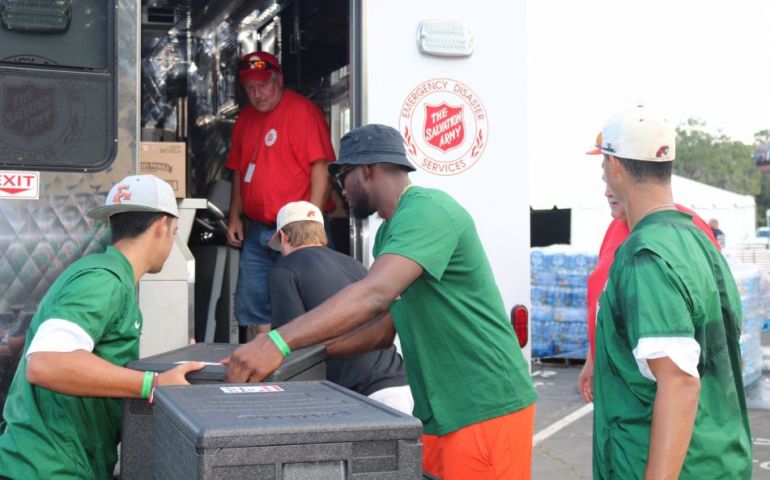 TALLAHASSEE, FL (October 19, 2018) - “We just had to do something. You don’t really hear about the devastation on the news and the totality doesn’t register until you hear the survivors’ stories,” said one of the 70 athletes from Florida Agricultural and Mechanical University (FAMU) that volunteered to support The Salvation Army’s disaster relief operation in Tallahassee this week.

The athletes, comprising FAMU’S women’s tennis team, men’s baseball team, and the men’s football team, prepared and served meals for The Salvation Army’s staging site, which has provided meals for displaced families in Leon, Wakulla, Gadsden, Jackson, and Calhoun counties in Florida. The energetic students provided comedic relief as they danced and joked around with the canteen crews, national guards, and the survivors as they distributed meals.

“We are very fortunate to have all these fine young people to come and help us and Operation Barbeque Relief in feeding this community. We have a lot of meals going out and it couldn’t happen without all the hands of the volunteers,” said Tallahassee Incident Commander, Major Ed Binnix.

To provide emergency services to the communities impacted by Hurricane Michael, The Salvation Army has been working alongside Operation BBQ Relief (OBR), an organization that works with volunteer teams of caterers, restaurateur, and BBQ competition teams to cook and cater barbecue meal into areas devastated by natural disasters. For The Salvation Army’s Tallahassee disaster relief operation, OBR has been cooking more than 15,000 meals a day.

“We’ve been out here since day one. We have guys that have been working 14-16 hours a day and they are beat. FAMU’s athletes helped pulled the weight and we can’t thank them enough,” said John Wheeler of OBR.

FAMU was also grateful to have had the opportunity to serve on the frontlines with The Salvation Army for their community. “These people are without power and told us that the food and water on The Salvation Army vehicles are all that they are going to have. There are blessed to have somewhere to go,” said Vaughn Wilson, FAMU Sports Information Director.