For Panama City Man, The Salvation Army is There for the Second Time in His Life 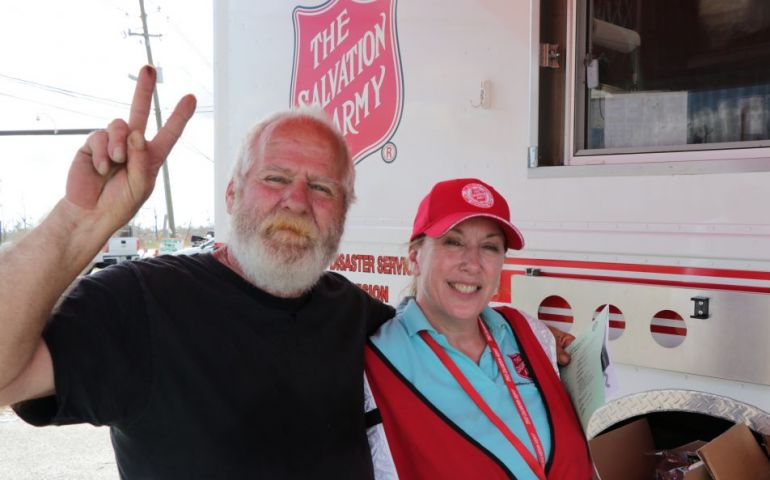 Panama City, FL (October 21, 2018) - It was lunchtime and Albert Potter was back at The Salvation Army canteen (mobile feeding unit) in Bayou George, a rural suburb of Panama City, looking for a hot meal. He’d been there many times over the past week since Hurricane Michael laid waste to his rented home and nearly all the others in his neighborhood.

“The roads were so bad initially you couldn’t even ride a bike down the street because of the downed trees,” says Potter. He never thought he’d still be in the area at this point because he had a trailer filled with food, generators, lanterns and propane so he, his daughter, son-in-law and 8-month-old grandchild could escape Michael’s devastation.

Unfortunately, just two days before the storm hit, everything was stolen. “I was really upset, but I was hoping whoever took it had children and needed it more than I did. It is what it is.” Now he’s got eight people living in his two-bedroom home, without power or running water and his only goal at this point is to make sure they’re taken care of, gathering meals, water, ice and anything else they may need.

“I’ve seen many things over the past week, incredible things. I’ve seen neighbors helping each other survive, it’s amazing.” Potter says Hurricane Michael, which nearly killed him as his roof was torn off, partially lifting him in the air, has strengthened his faith. “It woke me up. Seeing how much this storm has drawn people together and to have The Salvation Army making sure we have food to eat means everything.”

It’s not the first time Potter has been helped by The Salvation Army. When he was 10 years old living in Massachusetts, his family’s house burned down, and The Salvation Army came to their rescue. “They gave me and my siblings new beds, gave us some toys and food, that was nearly 50 years ago. They were just awesome.”