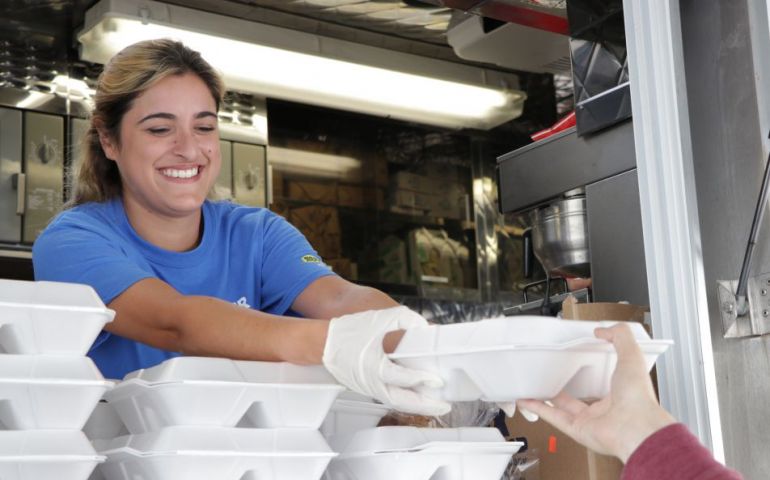 Panama City, FL (October 23, 2018) - It is often said that volunteers are the army behind The Salvation Army, helping the organization fulfill its mission of Doing The Most Good. That was evident on Monday as nearly 40 Best Buy employees spent the day “giving back” to help prep and serve meals on a Salvation Army mobile feeding unit at the Operation Barbeque Relief hub in Panama City.

“Our local store was severely damaged by the storm,” says Linda Morales. “Virtually every employee was impacted in some way, some of us lost everything but The Salvation Army was here for us and this is our way of giving back, to thank them and help our community.” It’s been an emotional week for Morales; dealing with the loss of her family’s home and being unable to work because of damage to the Best Buy where she’s employed. However, she says it was an easy decision when it came to donating her time to help. “The past week has been so sad and depressing but being able to volunteer and help the folks who helped us as well as other families who are suffering is really important. I’m glad I’m doing it.” Best Buy has offered to transfer all its Panama City employees to its store in nearby Destin if they choose, something Morales is strongly considering. Despite what happened, she remains positive about her future and what’s in store for Panama City going forward. “No doubt it’s going to take time to rebuild but we’ll be able to bounce back and we’ll be a stronger community as a result."