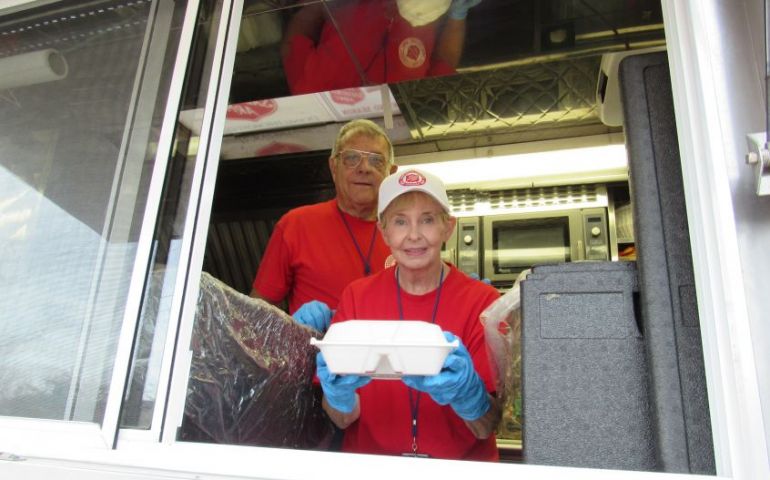 Panama City, FL (October 26, 2018) - Randy and Barbara Kimes of Dallas, Texas, made sure to grab their ponchos before heading out on Thursday. The blue skies over Panama City had turned grey. Heavy rain was moving in.  It was a drastic change in the conditions they endured at the start of their deployment.

The Kimeses are among more than 100 people from across the country who are up before dawn each day, assisting with The Salvation Army’s Hurricane Michael relief efforts in Panama City.  Volunteers work on The Salvation Army’s canteens, mobile feeding operations, which go directly into impacted communities distributing an estimated 15,000 meals to survivors and first responders each day.

“We couldn’t do anything we do without the volunteers,” said Chris Farrand, Operations Chief at The Salvation Army’s Panama City Incident Command. “It’s a sacrifice to be able to care for people. You don’t get a break. Days are 14, sometimes 16 hours long. When you don’t know where you are sleeping, you don’t have a shower, you don’t have power, it’s sometimes scary. The daily stress – it gets exhausting quickly.”

Despite the challenges, volunteering with The Salvation Army’s Emergency Disaster Services has a special place in the couple’s hearts.  Randy and Barbara have deployed together to numerous hurricanes, tornadoes and wildfires. They married two and a half years ago. Rather than flying somewhere exotic for a honeymoon, they worked on a canteen responding to flooding in south Texas.

“You see people out there who have lost everything, but they’re always smiling. They’re always happy,” Barbara said.  “It’s just really rewarding.”

On the days when emotions start to run high and the patience runs low, the Kimeses lean on each other for support. As the rain started to fall on this day, Barbara offered a welcome smile to those in line at the canteen service window and Randy helped her ready the plates of hot food.  They’ve been on the frontlines for more than a week. As long as they are together, though, the couple says that’s all that matters.

“We understand what each other is going through. If anything, I think it makes our relationships stronger,” Barbara said.