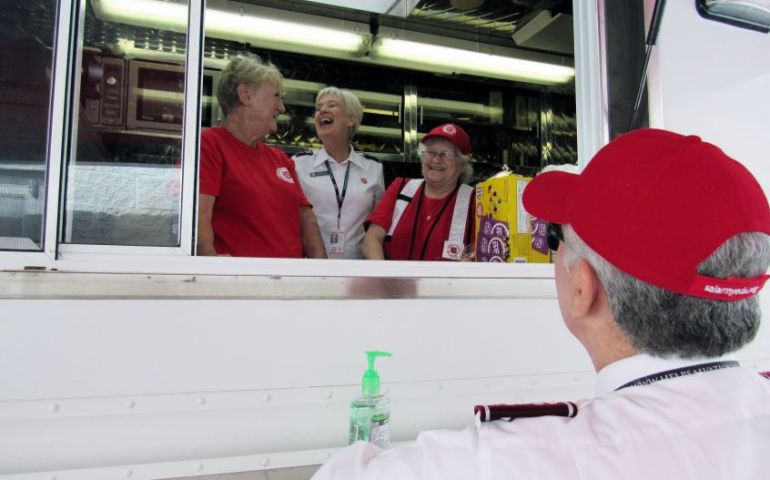 The canteen at the intersection of 16th Street and Beck Avenue was gearing up for another busy day of service when the Howells arrived to say hello.  Local residents and utility workers were lined up in cars and on foot for a hot meal, so Commissioner Barbara Howell hopped inside the canteen to help prepare plates of food.

“It’s heartbreaking to hear their stories and to know their entire world has changed for the foreseeable future.  Their lives may never be the same,” Commissioner Willis Howell said. “We’re here. The Salvation Army has come at their point of hurt, their point of need, to minister in Jesus’ name.”

Bob Myers, Panama City Incident Commander, led a briefing with the Commissioners where he detailed The Salvation Army’s relief operations across the area, which so far has included 200,000 meals, 123,800 drinks, 89,500 snacks served, and more than 13,000 emotional & spiritual care contacts.

As part of their visit, the Howells offered prayer, praise and words of support to each and every person and reinforced The Salvation Army’s commitment to helping those in need in Panama City.

“The devastation is overwhelming. We’ve seen it firsthand,” said Commissioner Willis Howell. “It rips your heart out, but The Army is doing great things.”