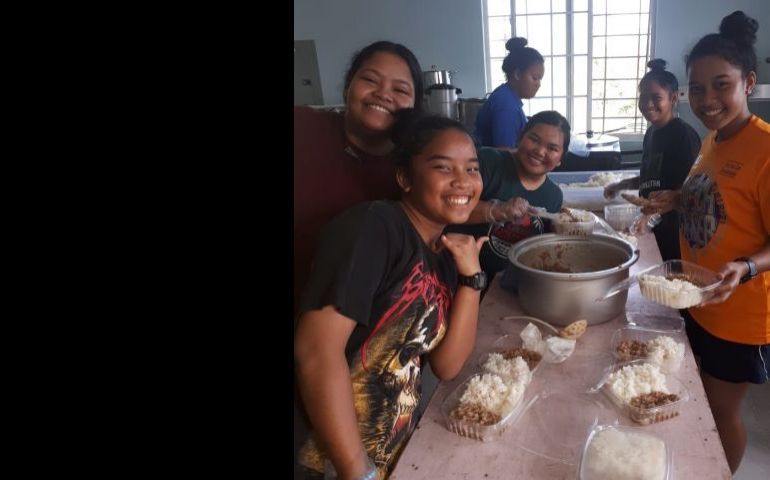 HONOLULU [Oct. 28, 2018] – Emergency Disaster Services [EDS] volunteers from The Salvation Army’s Saipan Corps prepared nearly 500 meals on both Saturday and Sunday for distribution to the island’s capital city emergency shelter by officials from the U.S. Department of Homeland Security. The Salvation Army Hawaiian & Pacific Islands Division has set up an online donation page to help fund emergency response efforts for those affected by Super Typhoon Yutu.

“Approximately 15 EDS volunteers from The Salvation Army’s Saipan Corps prepared nearly 500 meals on both Saturday and Sunday for distribution to those in need via Homeland Security,” said Captain Micheal Stack, Emergency Disaster Services Director for The Salvation Army Hawaiian & Pacific Islands Division. “Our Guam Corps officers, who are overseeing the response effort, anticipate the meal service support will expand to support another feeding site to serve the north and central parts of Saipan. At this point, we are seeking additional monetary donations to fund additional supplies for the feeding and relief efforts.”

During emergencies, the best way the public can help is to provide monetary donations which allows the delivery of the exact relief supplies a community needs including the ability to purchase meals and key distribution center items to support the local economy. Plus, The Salvation Army uses 100 percent of all donations designated ‘disaster relief’ in support of disaster operations. To donate, visit hawaii.salvationarmy.org.

About The Salvation Army Disaster Services
The Salvation Army is uniquely positioned to serve those impacted by disasters, however long it takes, because they are there before, during, and after impact. Beyond serving immediate physical needs, they also meet the emotional and spiritual needs that are unique to catastrophic events. The Salvation Army:

• Delivers disaster relief to an average of 382,000 people annually.
• Serves every ZIP code in the United States and touches almost 25 million lives a year.
• Has served survivors of every major national disaster since 1900.
• Remains in communities until needs are met and beyond.