Helping the Hungry and Tired in Bayou George 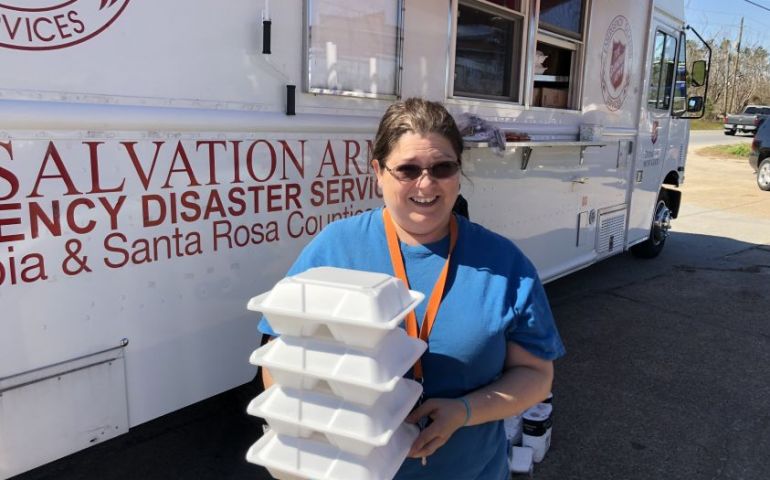 Panama City, FL (October 29, 2018) Hurricane Michael did not spare the community of Bayou George, in northern Panama City. Pine trees were snapped in half like toothpicks, roofs were ripped off houses and the windows of local business were blown out. Carrie Gurganus is one of the lucky ones. Her house escaped serious damage, but like most, she remains without power nearly three weeks after the storm.

“I was in a church behind a stained glass door and for a while we sat there and watched the shingles fly off the roof like missiles.  The steeple broke off and landed on my sister-in-law’s car. I prayed that the roof wouldn’t cave in,” Carrie recalled. “A scary experience that I will not go through again.  I will leave next time.”

As she was driving down Highway 2301 on Sunday, she spotted a line of cars lined up at a Salvation Army canteen (mobile feeding unit) and pulled up to get some hot meals for her family.

“Everyone who has come in to help has been spectacular,” Carrie said. “It’s very humbling. People take a lot of things for granted and I’m learning not to take anything for granted anymore.”

Salvation Army Captain Janice Dahlin of Salisbury, North Carolina welcomed Carrie with a big smile. She is among the nearly 200 Salvation Army officers, staff and volunteers who have participated in hurricane relief efforts in Panama City.  Having grown up in nearby Fort Walton Beach, Florida, she felt called to serve the survivors of Hurricane Michael.

“God wanted me to come home and help my people.  These people literally can’t go home,” Captain Dahlin said. “The joy of the Lord is my strength.”

The need in the community remains significant. On this day alone, Captain Dahlin and her fellow canteen workers distributed 600 meals in Bayou George. The Salvation Army, together with Operation Barbeque Relief, have served 236,400 meals in the Panama City area since October 11.

For Carrie Gurganus and her family, the prime rib and vegetable dinner from The Salvation Army will provide the sustenance they need to cut down several of the big pine trees that toppled over in her yard during the hurricane.

“You always see it on TV. You think ‘I feel so bad for them, but that’s them.’ But now you go down the street and you don’t even recognize where you live anymore,” she said.