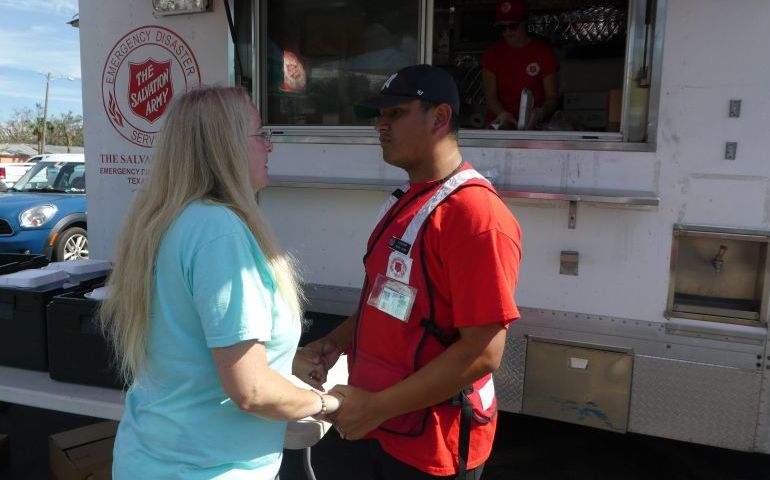 Panama City, FL (October 30, 2018) Andrea Dominy may have lost her house in Hurricane Michael, but she has not lost her faith.  She credits that to Lt. Miguel Alban, a Salvation Army officer from Seaford, Delaware, who she met just two days after the storm.

“I told him for the rest of my life I will never forget him,” Andrea said.

She was stuck in traffic and very much still shell shocked from devastation around her, when she spotted a Salvation Army canteen (mobile feeding unit) in her neighborhood. Andrea wanted to get some hot meals for her family, when Lt. Alban put his hand on her shoulder and offered some words of encouragement.

“I had prayer with him and I have been coming every day since,” Andrea said. “He made you feel comfortable and safe. And let you know that you are not alone, that you got somebody.”

Lt. Alban is among dozens of Emotional & Spiritual Care Specialists with The Salvation Army deployed to Panama City since October 11. They spend their days connecting with hurricane survivors like Andrea, helping them to heal from the trauma of this catastrophic event.

“I was at that location for 12 days and I believe God did that on purpose, because he was using me to speak through,” Lt. Alban said of his time with the canteen parked in Andrea’s neighborhood.

Now back at his home in Delaware, Lt. Alban said the outpouring of love from the residents of Panama City has been simply overwhelming. Several people have already reached out to him on Facebook, expressing their gratitude for his support.

“I will be in touch with him for the rest of his life,” Andrea said. “He changed me to be a better person.”

The Salvation Army’s emotional and spiritual care will be vital to hurting communities like Panama City, as it transitions from relief to recovery and rebuilding.

“It’s helpful to look around and see that people are here to help,” Andrea said. “For just a prayer, a hot meal or a shoulder to cry on.”