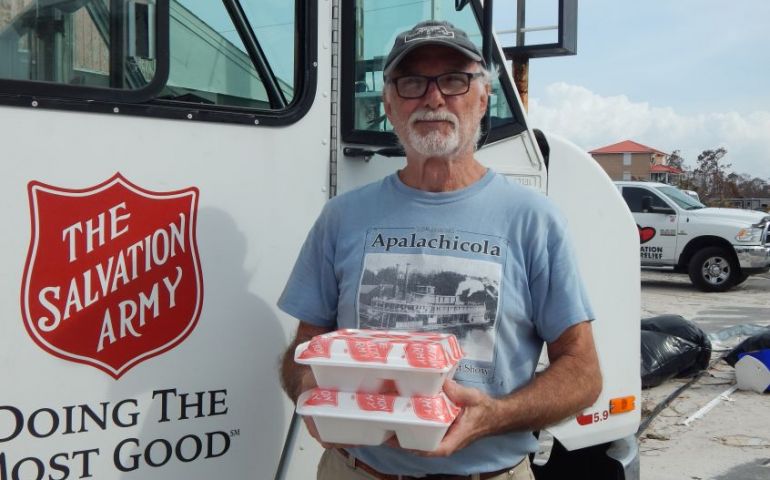 Mexico Beach, FL (November 9, 2018)--In the seaside community of Mexico Beach, Florida, the scenes of devastation are almost unreal. One month after hurricane Michael demolished most of the town, Salvation Army disaster workers continue to help survivors who are still digging out.

“It was horrifying to watch the ocean come down the driveway of our mobile home park,” says owner, Christine Brinkmeier. “I thought it was a tsunami. I didn’t want to die.”

Entire blocks of homes near the beach were wiped out. Rows and rows of other homes were turned into piles of splintered lumber. Roofs were torn away and fallen trees lay on top of mobile homes.

“The storm moved fast and got intense quickly,” says Brinkmeier, who hunkered down with nine others in the parks administrative office.

“Winds and debris whipped by,” says Brinkmeier. “Then the nine-foot water surge came. Waves were higher than the building. “

After the hurricane, and as soon as the roads began to clear, The Salvation Army was on the scene with a roving canteen that delivered meals, hygiene kits and supplies.

“We cheer when we see the canteen,” says Brinkmeier. “It is fantastic that The Salvation Army comes every day with delicious hot food and cleaning kits. We’ve lost so much. For all we know our belongings could be on the other side of town.”

The devastating impact of hurricane Michael was gut-wrenching.

Mike Kingrass and his wife were served meals by The Salvation Army during clean-up of their seasonal home.

“We arrived five days after the hurricane to find the lower level of our home demolished,” says Kingrass. “It was total devastation. We walked into a mucky, swampy, smelly mess.”

Mike and his wife spend their days cleaning out debris, discarding furniture and calling insurance adjusters and contractors.

“We have so much to discard and clean,” says Mike. “We don’t have time to think about cooking and when we do, we don’t have the energy. We are so grateful for The Salvation Army canteen and the hot meals they deliver."

“Challenges are the same for everyone in the community and clean-up takes an emotional toll. The Salvation Army is doing a wonderful job helping people. I’m just thankful our town wasn’t completely blown away.”