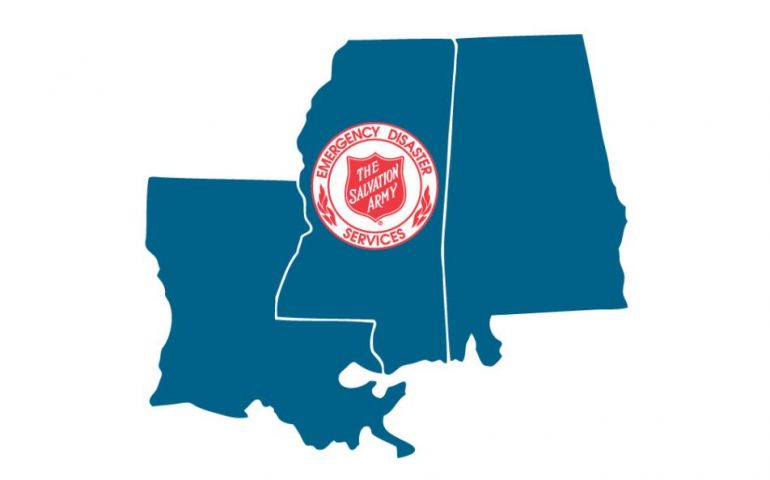 Opelika, AL (March 4, 2019)— After the historic and devastating tornado outbreak that occurred in the Southeast on Sunday, March 3, 2019, The Salvation Army is responding by sending a full Incident Command Team to Opelika, AL. Hardest hit by the outbreak was the mostly rural area of Lee County. Major William Shafer from The Salvation Army Tuscaloosa Corps will arrive today to serve as the Incident Commander. He will be supported by a six member team of Salvation Army representatives from Anniston, Birmingham, Montgomery and Jackson, Mississippi.

In the immediate hours following the storm, The Salvation Army Lee County Service Center provided 200 meals to first responders. Lieutenants Bryan and Tonya Farrington from The Salvation Army Montgomery Corps also deployed to the area Sunday evening with their mobile feeding unit to assist the local Service Extension Center Director. Service delivery will continue throughout Lee County today and include the distribution of hot meals, snacks, and beverages served from six mobile feeding units. Other than Montgomery, the mobile feeding units are deploying into the area from Anniston, Birmingham, and Biloxi, Mississippi.

In addition to tending to the physical needs of those affected, The Salvation Army is providing emotional and spiritual care, which is expected to be a significant need in the wake of this especially cruel and deadly disaster. The National Weather Service reports that  more tornado deaths occurred from this one outbreak than in all of 2018. Please keep the tornado survivors as well as first responders in your prayers. Donations to the tornado relief can be made at helpsalvationarmy.org.