The Salvation Army Helps Those Impacted by South GA Tornados 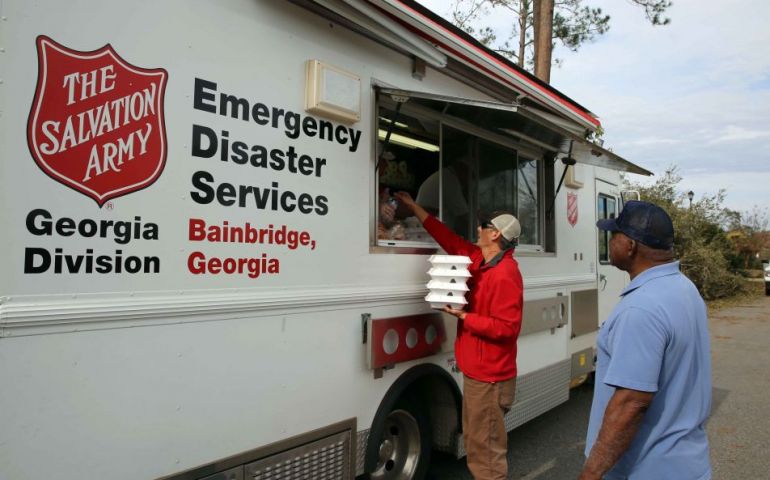 Columbus, GA (March 5, 2019) – A devastating series of tornadoes that ripped through eastern Alabama on Sunday forged further east to discharge a measure of their fury throughout the South Georgia region. In Columbus, GA, just thirty miles east from the main devastation located in Lee County, AL, The Salvation Army partnered with local authorities to strategize how best to help those in Georgia impacted by the winter storm.

One hundred and forty miles to the south, in Cairo, GA, The Salvation Army of Thomasville, GA started cooking meals today for responders and impacted area residents that were gathered at a Red Cross shelter located in Grady County, where an EF2 tornado with winds of 120 mph shook houses, toppled trees downed power lines. Canteens from Thomasville and Bainbridge, GA deliver 550 meals to the shelter and to impacted residents for lunch and dinner.

“We are humbled and prepared to provide relief services to our fellow residents in Georgia impacted by this devastating weather,” says Lanita Lloyd, Director of Emergency Disaster Services for The Salvation Army of Georgia. “And we will continue to assess and deploy Salvation Army disaster relief resources when and where they are needed.”

Lloyd says on Wednesday The Salvation Army plans to also start distribution of cleanup kits to help residents impacted by the storms.

The best way to help after a disaster is to make a financial donation.