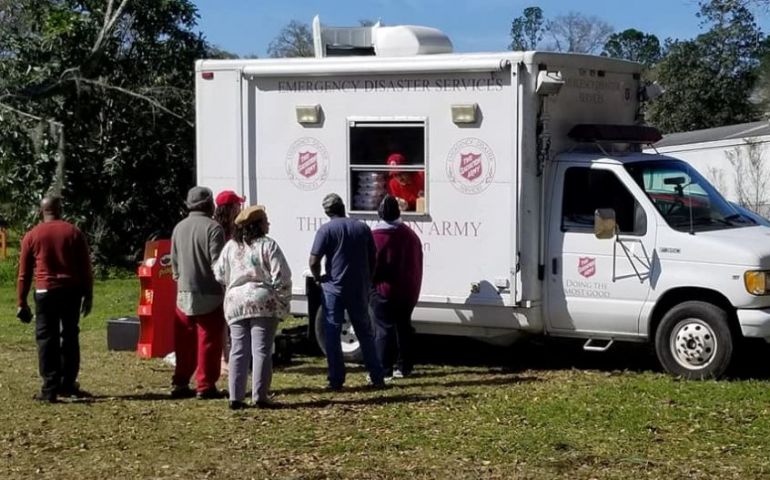 TALLAHASSEE, FL (March 7, 2019) - Soon after tornadoes touched down in the Tallahassee area on March 3, The Salvation Army was in the community surveying damage and providing care to survivors and first responders.

Working alongside the Leon County Sheriff’s Office and Leon County Emergency Management, relief efforts focused on the Baum Community where at least ten homes were damaged.

“Having someone say ‘here’s a hot plate, here’s a bottle of water,’ that’s something they don’t have to worry about,” says Adrianne Kirkland, Emergency Disaster Services volunteer with The Salvation Army.

In addition to distributing food and water to those impacted, The Salvation Army’s Emotional and Spiritual Care Specialist provided counseling to five families whose homes were destroyed by the storm.

"They came to bring us some food and water, and they've actually been looking out for us," said resident Janika Brooks. "I appreciate The Salvation Army, cause you just don't know. It's hard, until you go through it.” (via WTXL Tallahassee)

To help continue meeting needs in the coming weeks, The Salvation Army has also distributed clothing vouchers and offered additional assistance from the food pantry. Due to the community’s generosity in giving to a recent food drive, The Salvation Army can provide food for these families in crisis.