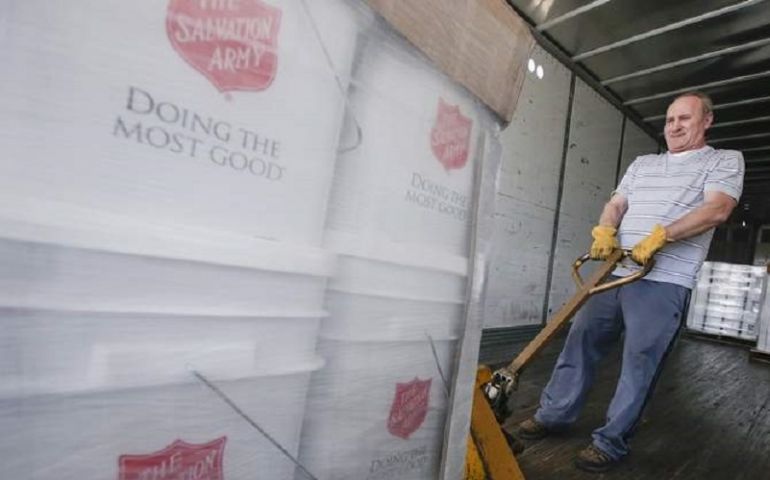 The Salvation Army Western Division is now in action over a 300-mile-long corridor—from Watertown, South Dakota…to the Omaha metro…to Fremont County, Iowa—providing food, supplies and more to communities affected by the Floods of 2019.  As of Monday morning, we had 12 canteens (mobile kitchens) spread out across our three-state geographical area, working in flood-affected areas.  Supply trucks loaded with flood-cleanup items are being sent out regularly to those same areas.  Salvation Army representatives are at work in those same areas, providing aid directly to people in need.  As of midday Monday, The Salvation Army had already served some 12,500 meals, nearly 12,000 snacks, 13,500 drinks, and around 5,200 additional items (such as flood-cleanup kits, etc.) since the flood-relief effort began.  Here’s a review of some of today’s operations, and a look ahead at what’s set for Tuesday:

In Sioux City, IA—Officers and volunteers returned to three-meal-per day food service in nearby Hornick, Iowa, where they also went door to door, checking on residents and offering assistance. They also delivered supplies Monday to nearby Ponca, Nebraska.

In Omaha, NE—The Kroc Center team served some 900 meals and over 1,000 drinks on Sunday as it worked in both Sarpy and Douglas Counties; they now have two canteens assisting their team in their flood-relief efforts.  Plus, the Disaster Resource Center continued its operations near 84th and Center.  It’s open again Tuesday from 9 a.m.-6 p.m.

In Watertown, SD—The team there ramped up operations Monday, providing refreshments to crews working flood-prevention measures, as the Big Sioux River is expected to crest yet this week.

In Norfolk, NE—Officers, staff, and volunteers provided meals on the Santee Reservation in Knox County, Nebraska.  They also dropped off flood-relief supplies there.  Plus, the team served meals in Columbus, Nebraska on Monday.

The Salvation Army is seeking donations to support flood-relief efforts.  To donate:  go to www.salarmyomaha.org and click on the ‘Donate Now’ button.