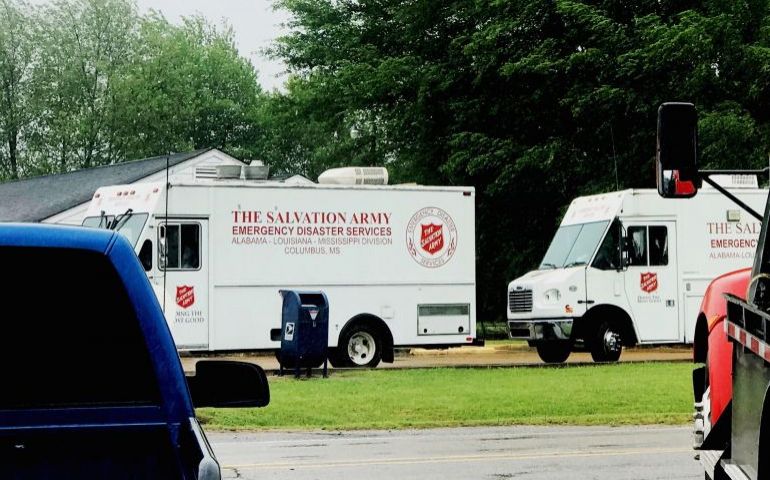 (April 15, 2019) – The Alabama, Louisiana, and Mississippi Division of The Salvation Army is continuing to assess needs and serve those affected by storms that struck the three state area over the course of the weekend, beginning on Saturday, April 13, 2019. The heaviest damage occurred from a tornado that struck Hamilton, MS, on Saturday night. Across the state line, Troy, Alabama also sustained significant damage from a Sunday morning tornado.

While first responders secured the affected areas and assessed the surrounding situation in the Hamilton, MS community, two mobile feeding units— one from Columbus and the other from Tupelo— arrived to help serve those in need. According to Lt. Christian Smith, Corps Officer of The Salvation Army in Columbus, 30 meals and 144 bottles of water were provided to those affected and the first responders there to render aid on Sunday. Lieutenant Smith says, “We’re planning on serving about 50 lunches and dinners today to both the affected community members and relief workers in the area.”

According to Kimberly May, manager of The Salvation Army Pike County Service Center, a mobile feeding unit from The Salvation Army Dothan Corps assisted her to help serve those affected in the Troy community. 60 meals were served to those living and providing disaster relief in the affected mobile home estates community of Hunters Mountain. They will continue their support today by providing lunch in the area.

Although, there is plenty of debris left in the path of the storms, fortunately many willing hands have arrived in the affected communities to engage in  the clean-up and make the recovery process as short as possible. “The community has really come together to help,” says Kimberly.