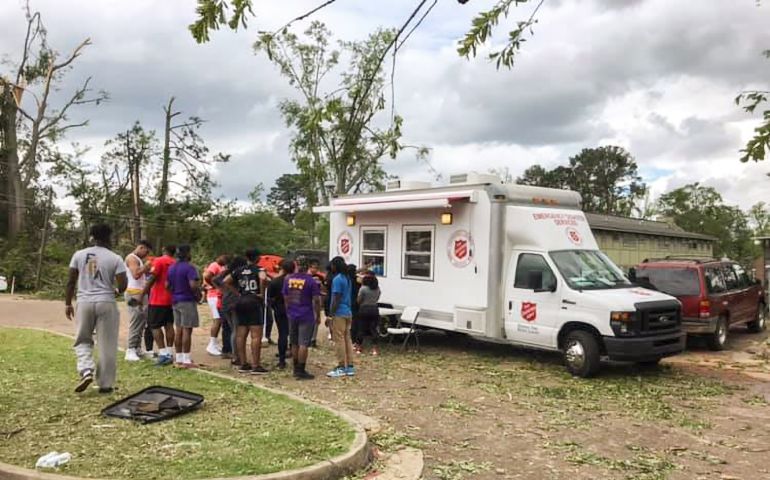 Ruston, LA (April 26, 2019) -- The Salvation Army has deployed three mobile feeding units to Ruston after a tornado ripped through that community yesterday morning, resulting in a considerable amount of debris from damaged commercial buildings, residential homes, and downed powerlines and trees. The city is home to Louisiana Tech which has a student population of approximately 12,000. The school experienced damage to its field house and a significant amount of debris scattered around campus.

In the aftermath of the storm, debris removal teams are in force to help bring some normalcy back to the community. The three Salvation Army mobile feeding units from Alexandria, Monroe and Shreveport will also be out in force today to provide meals, snacks and hydration to affected residents and debris removal teams. Captain Jerome “Jerry” Casey of the Monroe Corps is serving as Incident Commander and has been on the scene with the Monroe unit since early yesterday. He stated, “We’re meeting a lot of grateful people and they’re glad that we’re here. Some of them don’t understand why this happened. So we’re doing some spiritual nourishing as well as physical.” said Captain Casey. “There’s a community that’s hit, there’s a school that’s hit, there’s businesses that’s hit. So, we’re serving a lot of people in different situations,” he said.