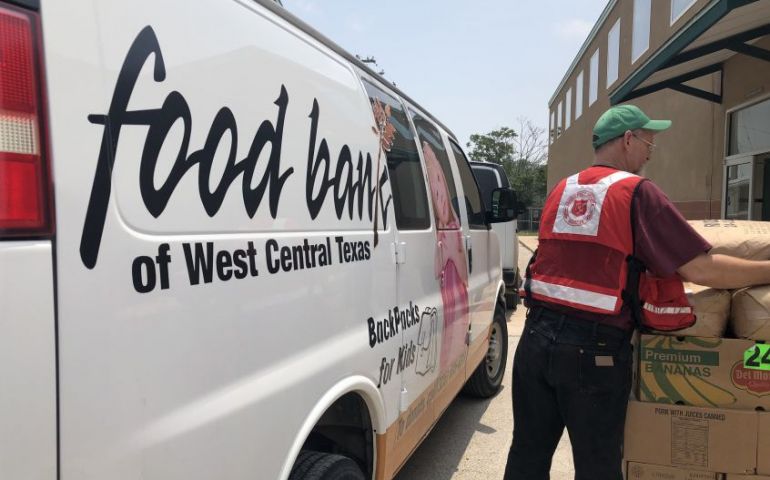 Dallas, Texas (May 20, 2019) – Severe storms produced destructive tornadoes in Central Texas over the weekend, May 18-19, 2019. Neighborhoods in the cities of San Angelo and Abilene sustained significant damage and The Salvation Army Officers, staff and volunteers quickly mobilized to deliver assistance and support to those affected.

In Abilene, Saturday, Salvation Army staff and volunteers roamed affected neighborhoods and distributed snacks, drinks and clean up kits. “Our disaster response team deployed on Saturday morning immediately after the storm and delivered coffee and snacks while assessing the damage,” said Shelley Futrelle, Community Relations and Development Coordinator in Abilene. “We’ve been serving all weekend, checking on and praying with our neighbors and will continue to do so as long as we are needed.” The Salvation Army prepared more than 200 breakfast burritos on Sunday and over 250 meals were served at lunchtime. Meals were delivered into affected neighborhoods on foot as storm debris made it impossible for The Salvation Army mobile kitchen to navigate the streets.

“The response in our city has been a collaborative effort and The Salvation Army is grateful for the support of our committed community partners," said Futrelle. “We appreciate the efforts of the Food Bank of Central Texas, Texas Baptist Convention, Atmos Energy, 2*1*1, Community Foundation and, of course, our volunteers.”

The Salvation Army church building in San Angelo sustained some damage on Saturday and power lines were down as a result of the storm. Severe damage was reported in one city neighborhood and The Salvation Army has been working closely with the City of San Angelo, Police and Fire Departments to provide meals, snacks and drinks based at Bradford Elementary School. “Being without power at the Corps building we canceled our church service on Sunday. Instead, members of our congregation gathered to make chicken salad sandwiches and hamburgers to serve from the mobile kitchen on Sunday,” said Major Stan Carr, Commanding Officer in San Angelo. “At the request of the city we spent today roaming the neighborhood supplying drinks and snacks to those impacted by the storm and to first responders working to remove debris and restore power.” The Salvation Army has provided 284 drinks, 361 meals and 358 snacks in San Angelo since Saturday. Staff have prayed with 26 individuals.

With additional storms forecast for the North and Central Texas area in the coming week, The Salvation Army EDS teams remain on stand-by, prepared to serve as and where needed.