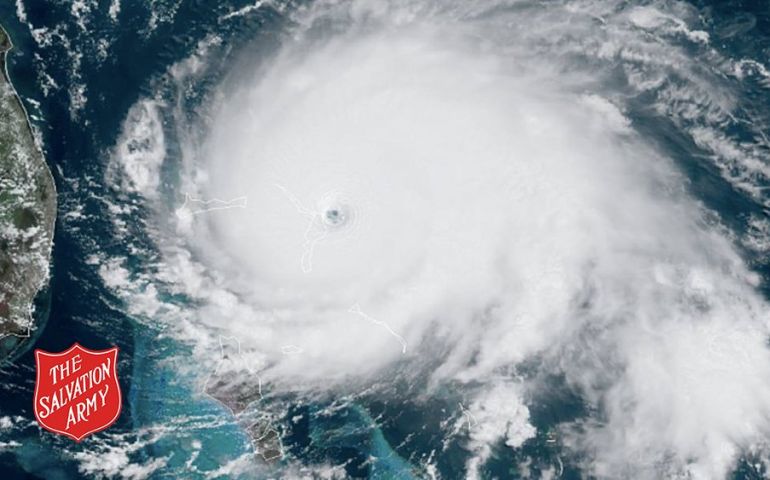 Nassau, The Bahamas - Majors Clarence and Karen Ingram, The Salvation Army officers in charge of operations in the Bahamas, are on duty in their Nassau offices firming up supplies and logistics for The Salvation Army’s response efforts.  They braved flood waters and electrical outages this morning coming to the office even though most businesses and government offices are closed due to the effects of the hurricane.

Major Clarence Ingram was on Bahamas National television last evening outlining The Salvation Army’s willingness to assist with the needs that have and will continue to arise as soon as it is possible to get into the areas affected.  He reported that in the wake of Dorian’s incredibly destructive impact on Abaco and its environs, that there are already an estimated 13,000 homes severely damaged and that he is concerned that damage toll will be even higher on Grand Bahama because Freeport is a major population center.  As of this writing Nassau has the only functioning major airport close to the affected islands but is accepting only limited flights because of the storms coming off of Dorian. The airports on Abaco and Grand Bahama islands are all closed.

The current forecasts are that it may take most of this week for the waters to recede enough that cleanup efforts can begin and as much as another week before the airports on Grand Bahama and Abaco will be able to accept traffic.

The last report from The Salvation Army Freeport Corps (church) came by text message this morning and stated that “Freeport is taking a pounding” but the building and the thrift store are holding up for the time being.  They are expecting another 12 hours of high winds and heavy rain.

Commissioner Devon Haughton, Territorial Commander, met with key personnel to look at The Salvation Army’s long-term strategic response to this disaster as well as activating departments to start working out the logistics for getting aid to those affected.

To support The Salvation Army's relief efforts in the Caribbean, please donate online at helpsalvationarmy.org or by phone at 1-800-SAL-ARMY.