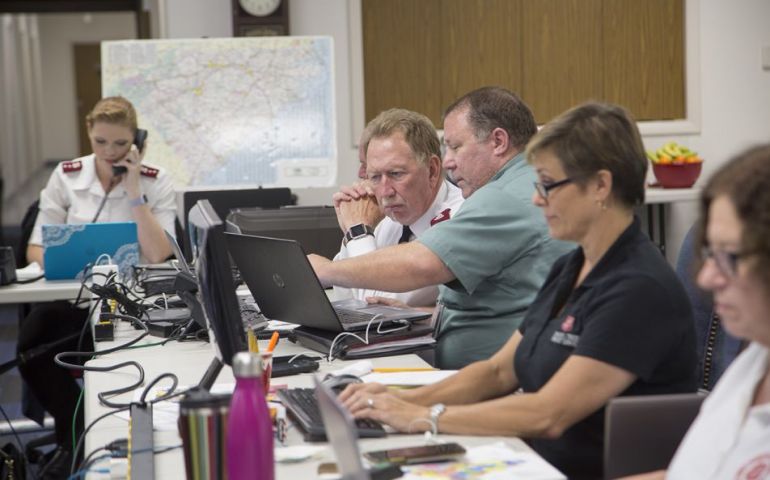 Resources and trained emergency personnel ready to respond in the Carolinas

Charlotte, N.C. (September 4, 2019)—The North and South Carolina Division of The Salvation Army has increased its readiness level as Hurricane Dorian moves closer to the Carolinas coast. The National Hurricane Center forecasts Hurricane Dorian will continue its track along the southeast coast and may move near or over the coast of South Carolina and North Carolina Thursday through Friday morning, bringing rain, wind, and flash-flooding and dangerous storm surge to the coast and inland.

The Salvation Army of the Carolinas has activated its trained network of disaster staff and volunteers for storm preparation and response.  At the request of local emergency management,  The Salvation Army is serving meals at EOC operations, evacuation shelters, and other mass feeding locations. In Raleigh, North Carolina, and Columbia, South Carolina, Salvation Army liaisons have been dispatched to the state emergency operations center (EOC) to coordinate with other human services agencies and government partners.  An Incident Management Team (IMT) has been activated and is in place at DHQ in Charlotte (Command Center) to coordinate the divisional support to local response operations.

“The Salvation Army is putting its best foot forward to prepare for the impacts of this powerful storm,” said Lt. Colonel Jim Arrowood, divisional commander of The Salvation Army of the Carolinas.”Though the storm is still off of the Carolina coast, our trained officers, disaster services staff, and volunteers are ready to meet the needs of the communities and share the love of Jesus Christ to all.”

After the storm passes, damage reports have been received, and local needs have been determined, Emergency Disaster Services teams will relocate to areas in need and focus primarily on providing food, hydration, and emotional and spiritual care to impacted individuals, families, and first responders.

“We are praying for the safety of the people in the path of Hurricane Dorian,” added Lt. Colonel Arrowood. “We will continue to pray as we move into service to care for people. The healing power of our Savior is every bit as important as the physical needs we address.”