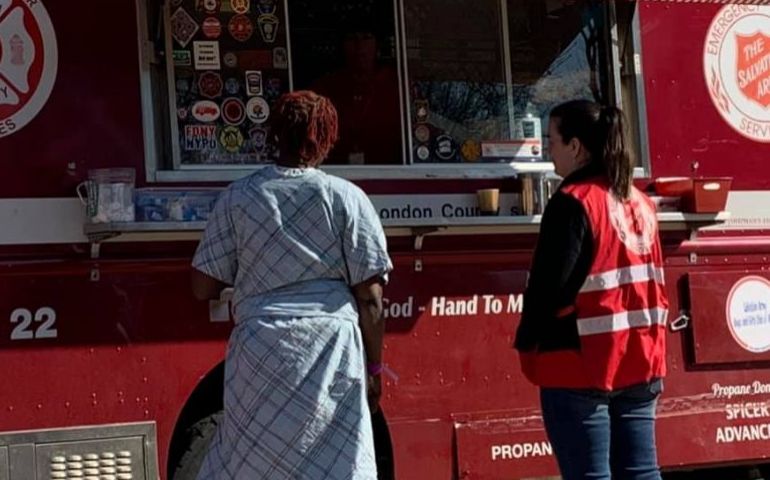 HARTFORD, CT – In the early morning hours of Sunday, March 8th, 2020, a large apartment fire broke out on Charter Oak Place in Hartford. Over 70 firefighters worked to save residents in this 3-alarm fire. One person died, as people scrambled from windows and literally threw children to safety from the burning building. Thirty were sent to neighboring hospitals.

The Salvation Army Emergency Disaster Services, as a component of the Hartford Fire Department’s response services, was contacted to provide critical support. The Salvation Army’s New London canteen responded and served food, drinks, blankets and hygiene kits to those brought to the temporary shelter, located at Pope Park Drive in Hartford. Later, the canteen was relocated to the fire scene on Charter Oak Place to serve first responders and fire investigators.

Gary Murphy, Coordinator of Emergency Disaster Services in New London, led the team of five volunteers. “Those being released from the hospital were brought here, actually in their hospital robes,” Murphy said. “We’re doing our best to give people blankets, hygiene kits and food.”   The 350 hot meals served were essential, but just as important is the Emotional and
Spiritual Care we provide to those dealing with the crisis. As survivors deal with the loss and trauma, we are also there to listen, care, let them know they are not alone, and pray with them if asked.

Major Carl Avery, General Secretary of The Salvation Army’s Southern New England Division said, “The Salvation Army is committed to caring for every part of a person’s recovery during this crisis, from the physical to the emotional to the spiritual.” The Hartford Fire Department, the Red Cross, and CERT teams were on-hand, helping residents with paperwork and transporting some to hotel rooms. More than sixty people have been displaced.

Traci Callaghan, Salvation Army Volunteer from New London County in Montville, came to the shelter around 11 in the morning. “People are positive and thankful, even though many of them have lost everything. I can’t imagine what they are going through.” Callaghan remarked. “We want people to know, while they are with us, that this is one spot they don’t have to worry today.”

While every disaster is unique and creates its own special needs, the core of The Salvation Army's Emergency Disaster Services consists of several basic services that address many of the typical needs of a disaster survivor. Our services are adapted to the specific needs of individuals and communities and scalable according to the magnitude of the disaster. Utilizing Emergency Canteens based in Connecticut and Rhode Island, no community or area is more than an hour away from coverage.