Providing Hope Amongst the Rubble in Tennessee 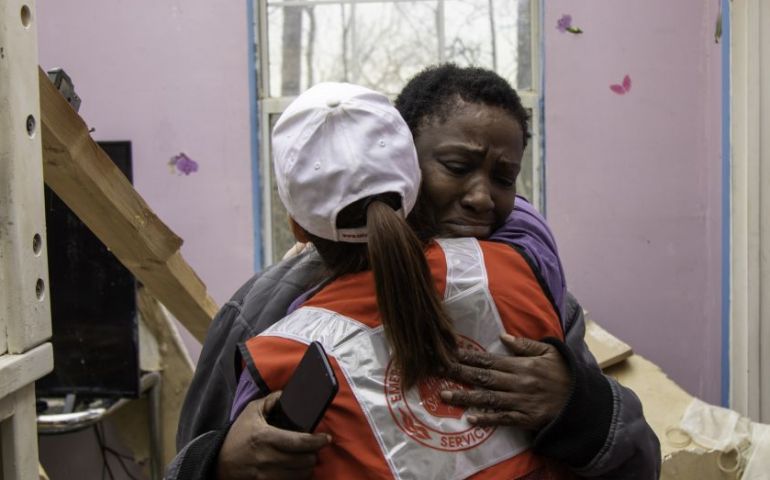 Nashville, TN – Salvation Army Teams are working across the community to serve our neighbors who have been affected by Tuesday’s tornadoes. We know our mobile kitchens are a welcome sight with their hot meals and cold water, but the prayers, hugs, and shoulders of the staff and volunteers manning those units are feeding the souls of our neighbors, like Angela and Suzan, who lost their home when the tornado struck Nashville in the early morning of March 3rd, 2020.

Suzan met Misty Ratcliff, Salvation Army Public Information Officer, at the front door with a simple “Would you like to come in?” Even though her home had no roof, and debris covered the floor, she welcomed our EDS workers in as she would any guest.

She has a small home and walked Misty through while explaining what happened during the tornado. Suzan explained that she was sitting in this chair in her room when the tornado headed towards their home.  She was able to get into the bathroom with her daughter and grandchildren just in time – she felt herself being lifted from the floor. The bathroom was the only untouched room in the home after the storm had moved on.

When Suzan returned to the bedroom after the storm passed, a roof beam lay in the chair she had been in just minutes before. As Suzan began to cry at the thoughts of what might have happened filled her mind, Misty embraced her in a hug.

Her daughter Angela shared that her boyfriend physically held the door closed as it was being pushed open by the storm to give the rest of the family time to get into the bathroom. Finally, the strength of the storm pushed him into the hall which thankfully allowed him to reach the bathroom, and safety, in time. Now, she just wonders what she and her family will do. She has no renter’s insurance.

While Misty was inside with Angela and Suzan, Angie Perez, Lead Accountant for Nashville Salvation Army, was outside speaking to Suzan’s other daughter Kristina. Kristina does not live in the home, but she was affected none the less. As she looks at what her family lived through, she is struggling with survivors’ guilt. Through tears, she told Angie “I feel like I deserted my family.”

Kristina was with her family earlier in the day in the home and originally planned to return for the night. Instead, she decided to stay with her boyfriend. Angie quickly wrapped her in a hug and assured Kristina that her presence would not have changed the outcome. However, because she wasn’t there Kristina was in a better position to help her family. Kristina then relayed that seeing the Salvation Army shield provided a “feeling of hope”, one that she had felt years earlier when receiving assistance from us while recovering from breast cancer. Angie and Kristina began to pray for peace, strength, and wisdom on how to navigate through this difficult time.

Before the Salvation Army team left, Angela shared with Angie and Misty that she feels like she has to be the strong one for her family. She feels that something might be wrong because she hadn’t cried yet. Angie reminded her that “God will only give us what he knows we can handle. God has given you the strength to be the rock for your family. He knows that you are strong enough to handle the load and see your family through.” She then circled Suzan and Angela for a final prayer.

Now the family is picking up the pieces. Thankfully, Angela’s employer provided funds for a hotel room, food, and clothes. But we know they have a long road to recovery, like so many of their neighbors. Our disaster response experts are already developing specialized long-term recovery plans for five different areas: Putnam County, Mt. Juliet, Lebanon, Donelson/Hermitage, and East Nashville/Germantown/North Nashville Areas.

The Salvation Army has been serving in Middle Tennessee for 130 years, and we will continue to be there, in our community, to help all of our neighbors, like Angela and Suzan, reach stronger futures.

Financial donations are the best way to meet the evolving needs and to support relief efforts.  The Salvation Army asks those who want to help the individuals and families affected by disaster to visit www.HelpSalvationArmy.org or call 1-800-SAL-ARMY and designate “disaster efforts.”  Monetary donations will ensure The Salvation Army can meet the most immediate needs of those impacted most.   For the latest Salvation Army disaster response news from across the country visit www.SalArmyEDS.org