The Salvation Army of Central Arkansas Serves During Trying Times 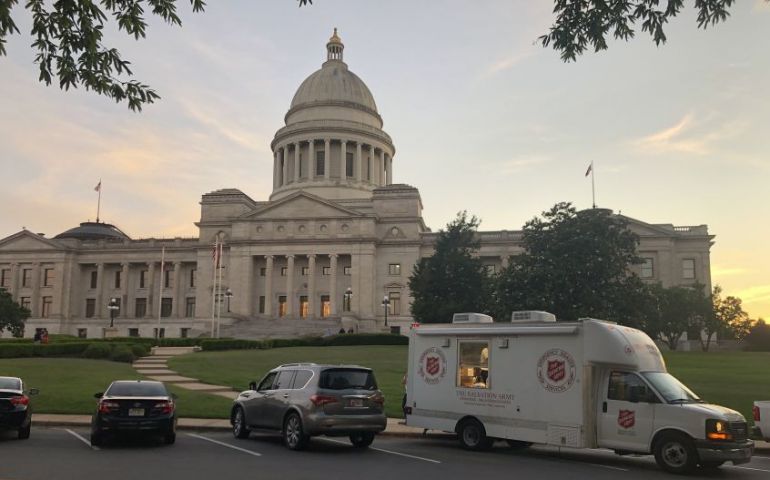 Little Rock, AR (June 3, 2020)  On Sunday, May 31, at the request of the Arkansas State Police, The Salvation Army responded to a local protest by providing hydration, snacks, and dinner to approximately 300 protestors and first responders. The Salvation Army partnered with the Arkansas Foodbank and the Southern Baptist Disaster Relief organization to help provide the meals.

When people are hurting, you can run away from them, or you can run toward them.  It was with that thought Major Jay Spalding, Lt. Nic Arroqui, and volunteer, Aaron Broshous, took The Salvation Army’s mobile feeding unit to the Arkansas State Capitol on Sunday night.  For nearly seven hours, they handed out barbecue, snacks, and water to both protesters and law enforcement.  The canteen served as a light, both literally and figuratively during the demonstration, which remained largely peaceful throughout the night.

As the night progressed, Major Spalding was able to talk and pray with several members of the community.  He approached one man, Henry, an EMT, as he was packing up his supplies.  Major Jay offered him some dinner.  Henry responded, “Major, I’m sure you don’t remember me, but you’ve helped me before.  I was in a really bad way and came to get food at your pantry once.  Another time, I was asleep on the step at The Salvation Army office because I didn’t have anywhere else to go.  You woke me up and gave me something to eat and drink.  I’m glad to tell you that I’m doing much better, and now, I get to give back and help.”