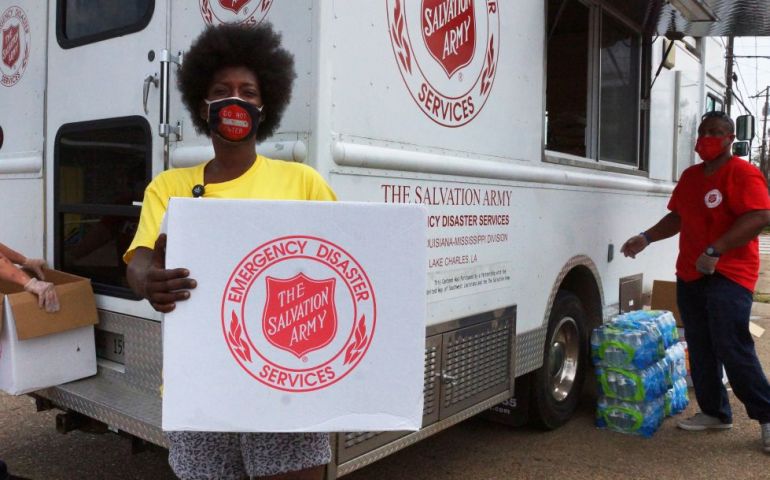 One such resident was Lillian Bryant. After describing water damage caused by a tree through her roof, she said, “I’m so grateful to have these supplies. My house has such an odor right now.” Bryant chuckled and continued, “My little girl just came home this morning from evacuating with relatives. She walked in and said, ‘Mommy, it STINKS in here.’” For many in Lake Charles, cleaning supplies will be one more small step toward recovery.

In addition to cleaning kits, The Salvation Army continues to provide meals as much of the city remains without power or drinkable water. Food is still hard to come by for many residents without vehicles. Many smaller local stores have yet to open. “I ate a few crackers last night and a few Cheetos today,” said Dorothy Mills. “A hot meal is just such a blessing.”

Ruth Kennedy was overjoyed to see The Salvation Army canteen. A lifelong supporter, Ruth remembers vividly the night her house burned down when she was a teenager. “The very next day The Salvation Army was there. I never forgot, and I donate whenever I have something to spare.”

The Salvation Army is committed to bring hope by meeting spiritual, emotional, and physical needs of those affected by Hurricane Laura as long as necessary. Through August 31, The Salvation Army has provided the following in Lake Charles: