The Salvation Army Serves After the Tornadoes in Roebuck and Columbiana 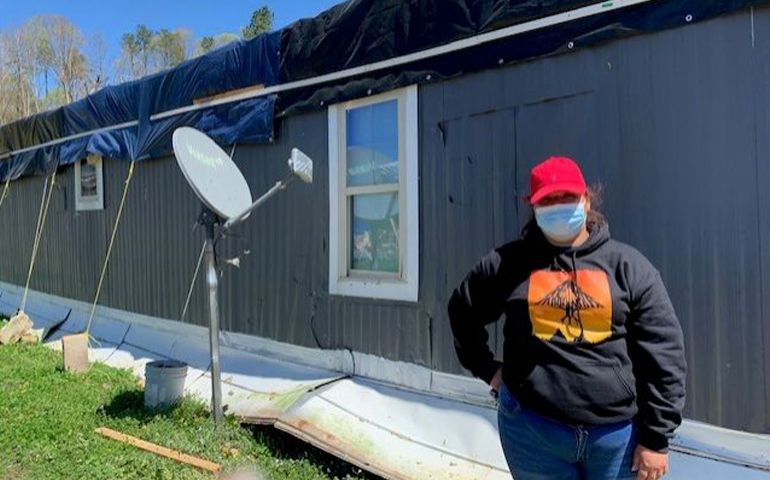 Birmingham, AL --The tornado outbreak that blew through Birmingham and surrounding areas on Thursday, March 25, not only affected large residential areas in Roebuck but also in rural locations like Columbiana.  As always, The Salvation Army was there, serving food and drink to those who needed them. “We’re here to do God’s work,” said Joe, a Salvation Army canteen worker from Tuscaloosa.

One of those affected by the tornado was Rosa Alas, who lived in a small mobile home park in Columbiana.   “My house moved,” she said, pointing to the bottom of her home.  “It actually moved.  And the roof came off too,” she added.   The tornado not only moved her mobile home off its frame a few inches, but also damaged most of the other homes in the small mobile home park.

Rosa says that she does consider herself fortunate because she and her family knew that the tornado was coming and drove to Montevallo to be safe with friends.  “This was my first home,” Rosa said, “and it means so much to me.  When I called my friend who lives next door,” she continued, “she said that my home was hit by the tornado.  I thought no, no it can’t be!  I just had refurbished my home and now a tornado—I was really upset.”

When Rosa returned to her home, she said she became tearful.  “I just started to cry,” she said.  “I didn’t know what to do.” The positive news is her home wasn’t damaged as much as some, and she is still able to live at her home.   She has a tarp covering her roof for now. Her father Antonio also lives near her and saw that his roof was gone too.  “I was so sad,” said Antonio, “because I have been living here for 10 years.” Antonio said that he also feels lucky because he has great friends who live near him as well.  “They have been helping to repair many of the homes,” remarked Antonio, who has been working on a roof of another home, even before his own home.  “We still are hurting,” said Rosa, “but we appreciate how many people care.  Hopefully, we can return to normal soon.”

To date, The Salvation Army has provided the following to those affected by the tornadoes in Alabama: