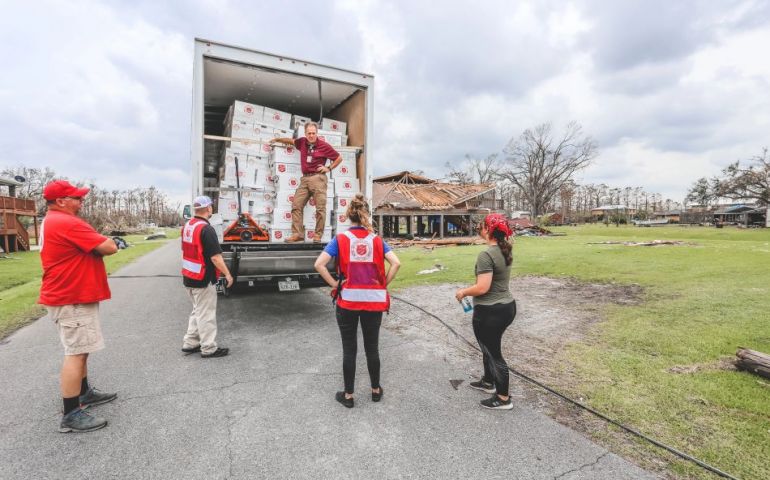 Gonzales, LA (September 12, 2021) – Since Hurricane Ida battered the coastline of Louisiana on Sunday, August 29, The Salvation Army Gonzales Incident Command has steadily expanded service deep into small southern bayou communities, some of the hardest hit and most underserved areas. Mobile feeding units and supply distributions are providing meals and practical support to the area, much of which remains without power.

Post storm, The Salvation Army quickly established two Command Posts to coordinate the statewide response to Hurricane Ida. One is based in New Orleans, and the second, in Gonzales just outside of Baton Rouge, has been coordinated by the Texas Incident Management Team (IMT). “The focus of the response effort has increasingly shifted south into bayou communities that were hammered by the storm. They have sustained significant damage and the majority still do not have power and have been told it could be the beginning of October before electricity is restored,” said Alvin Migues, Incident Commander for the Gonzales IMT. “One of the many challenges has been the substantial distance from the command post and field kitchen to these communities, especially as traffic in the area increases. The crews based in Gonzales are now driving an average of 90 minutes each way, delaying service.”

Migues and his team have been actively working with local law enforcement, community agencies, and corporate partners in southern Louisiana, and have developed a solution to at least part of the problem. On Sunday, September 12, a second field kitchen, operated by Southern Baptist Disaster Response will begin producing hot food in the parking lot of Rouses Markets in Houma. “Units serving in the southern-most locations will depart Gonzales earlier in the morning, beating the traffic,” said Migues. “They’ll collect their hot food in Houma and get on with the business of helping people.”

“With power still out in the bayou area, our stores are some of the only places to get a hot meal and cold drink right now,” said Donny Rouse, CEO, Rouses Markets. “Partnering with The Salvation Army, which provides emergency relief, helps us bring even more food to our bayou communities. Their field kitchen is set up and staged in about a quarter of the parking lot of our Village East location in Houma. They will give out thousands of free meals in the coming weeks to people in need.”

“We are so grateful to Rouses Markets for allowing us to set up the kitchen on their property. Positioning closer to our service locations was crucial to the continued success of our food delivery in the hardest hit communities,” said Migues.

Supplies were delivered to Grand Isle on Saturday, a community located on the southern tip of the Louisiana coast that has experienced significant damaged. Cleanup kits and breakfast boxes were made available to residents who have been allowed back to assess damage to their homes. “We are planning to have a mobile feeding unit in Grand Isle beginning Tuesday, providing a hot meal, water, and emotional and spiritual care to residents, power workers, and law enforcement,” said Migues.

To make a financial donation to support ongoing Hurricane Ida relief efforts, go to helpsalvationarmy.org or call 1-800-SAL-ARMY. For the latest disaster response information, go to www.disaster.salvationarmyusa.org and watch for regular updates on our social media pages at www.facebook.com/salvationarmytexas/ and www.twitter.com/salarmytx