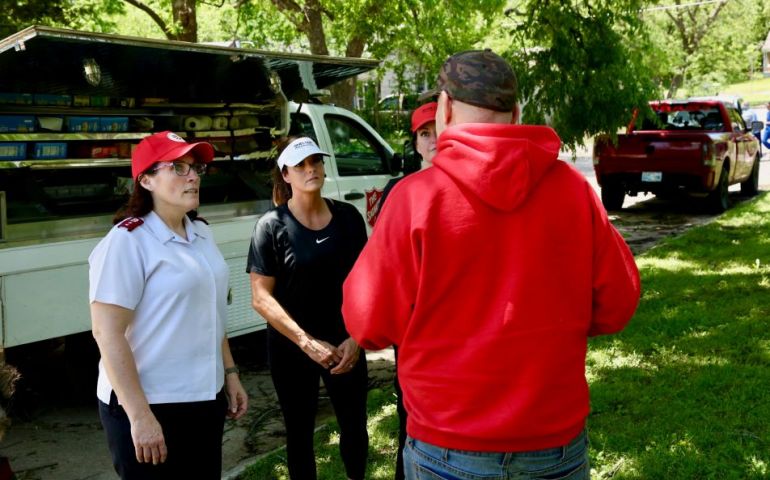 While roaming neighborhoods in Seminole County, Oklahoma, Captain Connelly, Shawnee, Oklahoma Corps Officer, came upon a family who was in the front yard of their home, cleaning debris and beginning to patch their home from the tornado’s damage. After dropping off sandwiches, chips and drinks, the Emergency Disaster Team turned to head back to continue their outreach when one of the young people from the family shouted to get Captain Connelly’s attention. “Hey ‘Salvation Army lady,’ wait! My grandfather wants to speak with you,” she exclaimed.

Captain Stacey Connelly returned to the family’s porch where she was met by an elderly gentleman. Though visually impaired, he understood the gesture that The Salvation Army had offered his family, and the gentlemen reached into his pocket and then placed $21 dollars into the hand of Captain Connelly. “Thank you for feeding my family and for all you are doing,” the man said.

"It brought tears to my eyes, seeing the genuine generosity of this gentlemen," said Captain Connelly.  She knew it was all that he had to offer at the time but seeing that he wanted to help The Salvation Army continue to serve his community and all Seminole County, just as his family had been served.

The Salvation Army has served more than 1,554 meals, 1,588 drinks, 1,695 snacks and has provided emotional and spiritual care to 47 people. The Salvation Army is working with government officials as well as other partners to coordinate additional service.