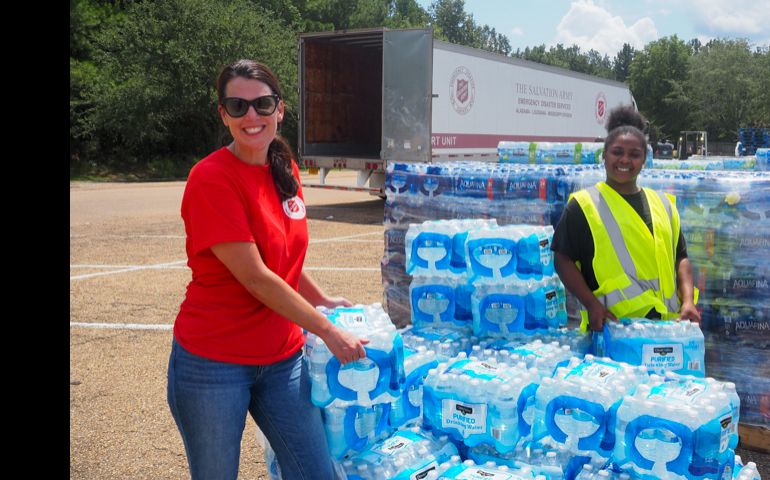 Jackson, MS (August 31, 2022) - Excessive rainfall doused central Mississippi and the city of Jackson throughout the month of August. Flooding of the Pearl River caused pumps to fail at a Jackson water treatment plant, resulting in more than 150,000 people in Mississippi’s capital losing access to drinkable water. For many, there is no running water at all as water pressure has been reduced to an unsustainable degree.

In response to this crisis, The Salvation Army has activated an Incident Command Team and will begin coordinated disaster response efforts in the city. Today, in partnership with Walmart, The Salvation Army distributed two truckloads of water in a drive through event in a Walmart parking lot.

“I’ve been everywhere trying to get water. This is such a help. We don’t know when we will have access to water again. This is literally lifesaving,” said Octavia Mallard, a resident of Jackson whose house currently has no water pressure.

Walmart representative, Joel Berry, stated, "We are glad to help out our community. That's why we are here."

The Salvation Army has more drive through distributions scheduled this week, and efforts are currently underway to set up water delivery to underfunded areas where local residents lack transportation or means to pick up water on their own.

William Trueblood, the Emergency Disaster Services Director for Alabama, Louisiana, and Mississippi, said, “The Salvation Army is committed to assisting the most vulnerable, and we understand that there are members of this community without the means of transportation to get to the distribution sites. We feel it is our obligation to take water to those who need it most.”

Donations to support relief efforts may be made online at helpsalvationarmy.org or by calling 1-800-SAL-ARMY.