The Salvation Army is Here (in Jackson, MS). TELL EVERYBODY! 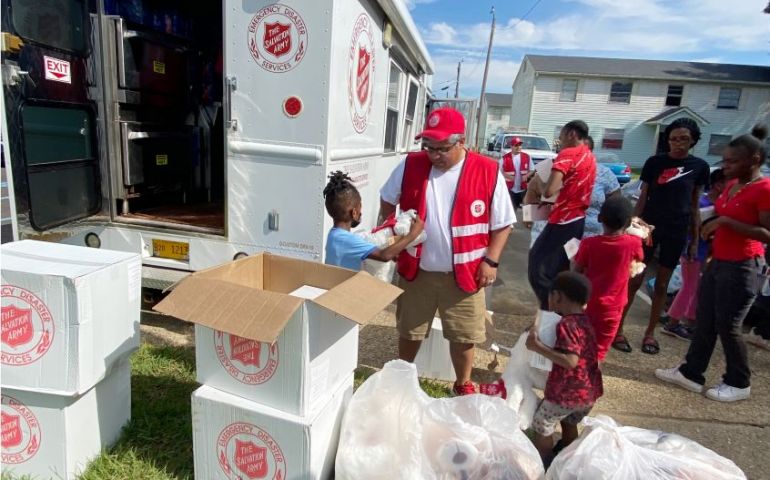 Jackson, MS (September 2, 2022) - After driving his canteen up one side of a street in Jackson and seeing no residents outside, Lt. Victor Estudiante remembered John 21:6 and Jesus’ command to cast their nets on the other side.

After turning and driving back down the street, an elderly resident flagged the canteen down and asked if they had water. She then pulled out her phone and told her neighbor, “The Salvation Army is here…tell everybody!” Within minutes, the street was flooded with residents who were able to receive much needed cases of water for their homes.

“We thank you so much. Usually folks forget about us,” said April Williams, who watches her niece and nephew each day while they are in remote school. “We filled our tubs up to be able to flush the toilet. We were down to half a case of water. This is really handy.”

Nina Ghaffari, State Liaison with The Salvation Army, reached out to ambulance services and fire stations to determine response hotspots and apartment complexes with the most vulnerable populations without access to water sites. The Salvation Army was then able to focus neighborhood distribute in these areas.

“Jackson is home, but right now the main thing we need to survive is impossible to get,” said Doris Waites, a lifelong Jackson resident. “It’s a blessing. We need all the help we can get. Thank God for it.”

In addition to water, The Salvation Army staff and volunteers distributed stuffed animals to neighborhood children. “In times of disaster, we often think about immediate needs, but the little things are just as important like giving a stuffed animal to a child whose life has been changed forever,” said Captain Heather Dolby. With no fixed date for a solution to the water crisis available, The Salvation Army will continue to evaluate need and provide relief to vulnerable populations in Jackson, Mississippi.

Donations to support relief efforts may be made online at helpsalvationarmy.org or by calling 1-800-SAL-ARMY.