Community Band Together with Salvation Army after Hurricane Ian 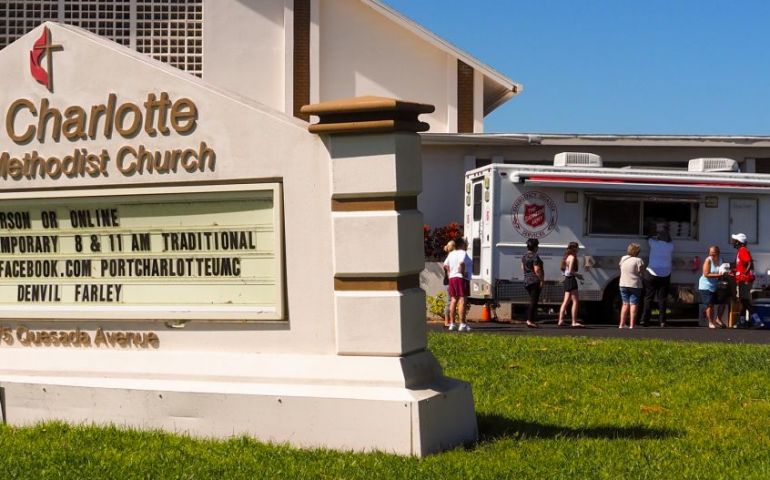 Before the storm, affordable housing and childcare were large concerns in the area, and Rev. Farley is concerned those demands will only increase with so many people now out of work. With schools closed indefinitely, many parents are left with no one to watch their children. Additionally, many children are now without access to breakfast and lunch they would normally receive at school.

The church building received extensive damage, but its current main focus is cleaning up the section of the building that operated a preschool.  Director Natalie Rodrigez said they have been able to check on all of their families and staff. “We still have some staff stuck and unable to get out, and one living in a trailer because her house was destroyed, but little by little we are working our way toward getting back to work and some sort of normalcy.”

The church offered their front parking lot as a space for Salvation Army canteens to set up and feed as their neighborhood is still without power. The back parking lot currently houses over 50 ambulances and emergency response vehicles and is operating as an emergency triage center because the local hospital flooded and is not currently operational.

“We are just trying to do everything we possibly can to help our community,” said Reverend Farley. “Right now, there are many groups giving out food. What about next week? Who will be here then?”

The Salvation Army had crews on the ground within hours of the storm passing. With no end of need in sight, the Army remains committed to service on the ground for the foreseeable future. Captain Stephan Wildish, Canteen Coordinator for the Port Charlotte Incident Command team, said, “We’ve seen many areas with such a need. Our teams are so committed to helping these people and continuing to show love and bring hope to the community.”