WE ARE UNITED: All Boundaries Disappear When Help is Needed 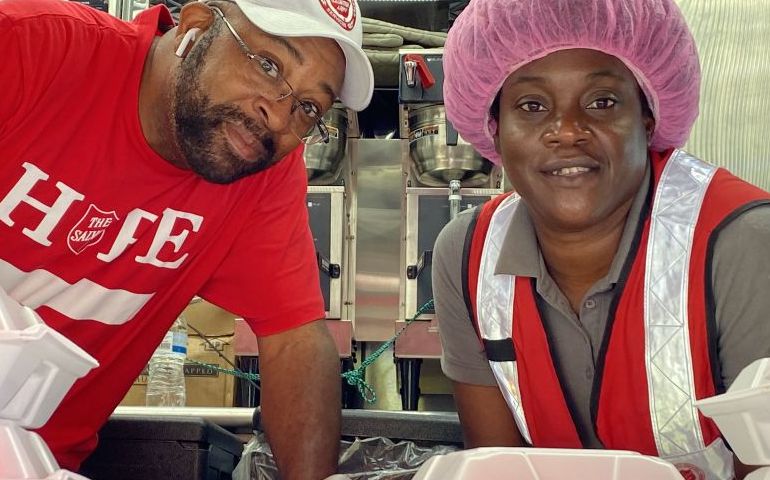 Port Charlotte, FL – The pulsating buzz of activity rising from the parking lot of the Charlotte Technical College is electric. This area, which serves as the staging area for The Salvation Army’s Hurricane Ian’s Port Charlotte Incident Command, is strategically covered with ten mobile feeding units, three rapid response units, pallets of supplies, and heavy-duty equipment. Feverishly moving amongst the supplies and equipment, dedicated volunteers work to bring hope and help to the counties of Charlotte, DeSodo, and Sarasota.

While there are several local residents pitching in to assist with this relief effort, there are a significant number of volunteers from outside of the service area – including Maine, Massachusetts, New York, Oklahoma, Pennsylvania, and other areas of Florida.  The mobile feeding units are from Ft. Lauderdale, Lakeland, Leesburgh, Martin County, Miami, North Central Brevard, Palm Beach, Panama City, Pensacola, and Tallahassee. The rapid response units are from Ft. Lauderdale, Miami, and Palm Beach. Each volunteer has their own individual story as to why they have chosen to serve in this effort but all of them agree on one thing - “We are UNITED.”

One such volunteer is Sandrea Levy, the Ft. Lauderdale Corps Program Assistant. “Considering I only packed for a weekend, I didn’t know exactly what I was getting myself into,” shares Levy, “but I knew I had to come. How can you not respond when others are in desperate need?” Originally from Jamaica, Levy began as a part-time driver at The Salvation Army in 2012. She continued in this role, while working full-time for the local school board, until a lifechanging experience at Women’s Camp this May. While performing a sacred dance in one of the weekend services, she felt God clearly telling her, ‘I have more for you,” which resulted in her employment as the Corps Program Assistant.

Little did she know, her commitment to full-time ministry at the Ft. Lauderdale Corps would lead to an emergency disaster deployment for Hurricane Ian. “I am honored and humbled to be here,” explained Levy. “I am reminded to be grateful for every day I wake up. So many of the individuals I have met during my time have lost everything. I want them to know my heart is united with them.”

In a world that is oftentimes known more for animosity than goodwill, moments like this remind us, regardless of religion, ethnicity, geographic boundaries, or economic background, we all need each other – we are UNITED.