WRONG TURN FOR US, RIGHT TURN FOR GOD: Being in the right place at the right time 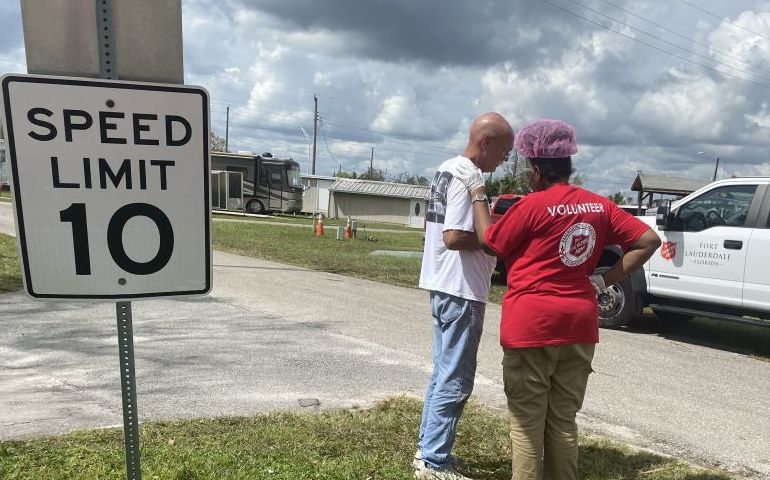 Port Charlotte, FL  – During hurricane recovery efforts, going from point A to point B can be quite the adventure. Oftentimes, blocked streets, malfunctioning lights, and spotty cell phone service can create a maze of adjusted routes and wrong turns before the final destination is reached.

In one such case, the crew on the Ft. Lauderdale mobile feeding kitchen learned God uses adjusted routes for His glory. Captain Marlon Rodriquez, Emotional and Spiritual Care Specialist from Lebanon, Pennsylvania, shared, “We were traveling to our feeding location, and we took a wrong turn. As soon as we turned on the street, a panicked woman flagged us down and said, ‘Help! My husband is having a heart attack.’”

Immediately, the canteen crew jumped into action. Rodriquez comforted the wife, while Kevin Small, canteen worker, assessed her husband.  Levy, the other canteen worker, called 9-1-1. While they waited for the ambulance, the entire crew fervently prayed God’s comfort and peace over the man and his wife. Within minutes, the ambulance arrived, stabilized the husband, and transported him to the hospital. The wife could not thank The Salvation Army enough for being there for them during their time of need.

“It was an honor to provide comfort in the name of Jesus,” shared Small. “In those sacred moments of being the hands and feet of Christ, every other care and concern paled in light of what was before us.”

Levy declared, “Clearly, it was a wrong turn for us, but a right turn for God.”

Even after such a dramatic pitstop, the canteen crew did not forget their ultimate destination. “We continued on to our feeding site,” shared Rodriquez. “After all, there were hungry people waiting for us. We couldn’t disappoint them.”