Salvation Army Corps Volunteers Go Above and Beyond 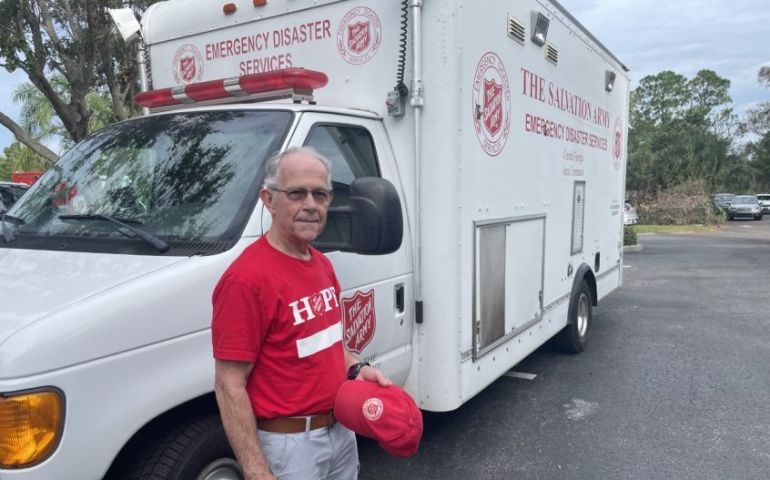 When disaster strikes, there are always poignant examples of service that have a profound impact on people’s lives.

An 81-year-old disabled woman named Terri in Englewood, FL, had her home boarded up prior to Hurricane Ian’s arrival and was safely evacuated. She returned to survey the damage, but also found she could not get back in her home because she couldn’t find anyone to take the boards off.

A regular donor to The Salvation Army in Venice, Terri called the center to see if they might know someone who could help her get into her house. After putting out the word, the corps’ bandmaster, Dan Bowles and his wife Karen, volunteered to help. This was in addition to the many hours volunteering for canteen service as part of The Salvation Army’s Hurricane Ian disaster response in southern Sarasota County.

Dan and Karen were able to remove all the boards and panels from Terri’s house to give her access. “I’m really grateful for their help,” Terri said, “because it’s been very hard to find workers to help homeowners.”

“I know this isn’t what they normally do,” said Terri. “They helped me get into my house after I tried for a week to find somebody.”

“And they didn’t charge me!” she added.

The disaster response team based in Venice sends out eight canteens for lunch and dinner each day. One of the locations is an especially hard-hit area in Englewood called Mobile Gardens, where 100% of the residents sustained hurricane damage. Their sturdy activity center fared better, though, and it even contains a small commercial kitchen, not common for a mobile home park.

One Mobile Gardens resident is Beverly, who moved to Englewood in 2010. Now retired, she likes to spend her time cooking for friends and leading cooking classes for their owners’ group. But after Hurricane Ian came through, it was clear all the food in people’s freezers who quickly go bad.

Beverly went to work in the kitchen, preparing meals with whatever food she could get from the residents. Her delicious lunches and dinners were a Godsend to the residents, but it wasn’t sustainable. That’s when The Salvation Army's canteen arrived and Beverly got a much-needed rest so she could focus on applying for grants to repair her home. Not only did the team provide hot lunches and dinners, they also provided boxed, shelf-stable breakfasts as well.

“It’s really amazing what they did for us,” said Beverly. “I’m so thankful for The Salvation Army. They’re a great organization and we are blessed that they’re helping us here.”

The Salvation Army’s mission is to meet human need in His name, and the teams deployed to Florida are helping people at arguably their most difficult times. Thus far, 232 disaster workers have distributed more than 425,000 hot meals, beverages and snacks, and provided spiritual care to more than 10,000 people. Today, more supplies are being delivered, including tarps, baby diapers, work gloves, large trash bags, water and Gatorade. The Salvation Army will provide relief in South Florida for as long as the need exists.