The Salvation Army's Response to Emergency Disasters is Second Nature 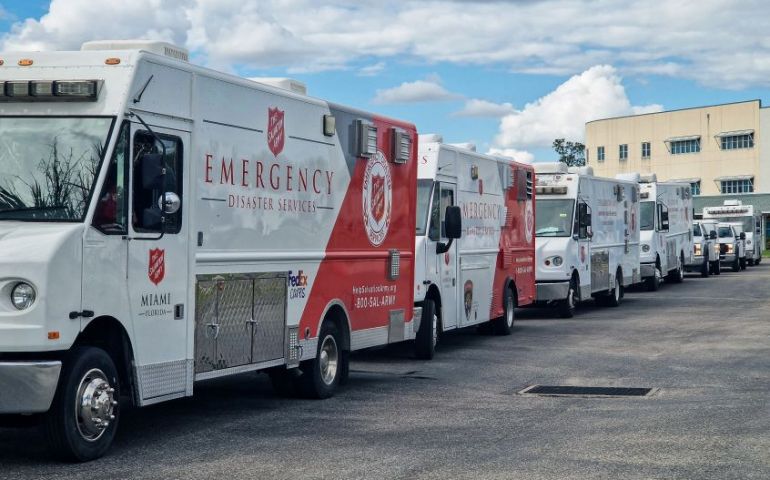 VENICE, FL – The military-style structure of The Salvation Army is a significant advantage in quickly responding to disasters like Hurricane Ian. Their Emergency Disaster Services group (EDS) can move trained disaster workers and equipment into affected areas within hours of an event. The response in South Florida has thus far involved 40 Salvation Army mobile feeding units and 234 trained officers, staff and volunteers.

“Managing a large disaster response team takes a great deal of coordination,” said Major Bobby Jackson, General Secretary overseeing Emergency Disaster Services in Florida. “Our para-military structure with thousands of officers, soldiers, employees, and volunteers at the ready enables us to quickly and efficiently mobilize large numbers of people, vehicles, equipment, and implement a network of distribution centers and suppliers to address the many needs facing those affected by a disaster.”

The initial goals are to provide meals, hydration, and emotional and spiritual care. This week, however, the organization is also moving in supplies to aid in the recovery, such as tarps, clean-up kits, work gloves, large trash bags, laundry detergent, diapers, hygiene kits for various ages, sanitizer, water/Gatorade, and more. For example, the Venice command center alone is expecting three semi-loads of supplies this week.

The Salvation Army does all of this while simultaneously maintaining normal operations and services throughout the affected areas in southwest Florida. Food pantries, Angel Tree sign-ups, financial assistance for rent and utilities, and more continue daily. In addition, the Venice office has taken over the programming that would normally occur at the North Port service center, as that location was destroyed in the hurricane.

Thus far, The Salvation Army has sent 234 trained disaster workers into the affected areas of the Gulf coast, including 40 mobile feeding vehicles. distributing more than 457,000 meals, snacks and beverages to those impacted by the hurricane. In addition, they were able to offer emotional and spiritual care to more than 11,000 people.

Those wishing to directly support The Salvation Army response to Hurricane Ian can: