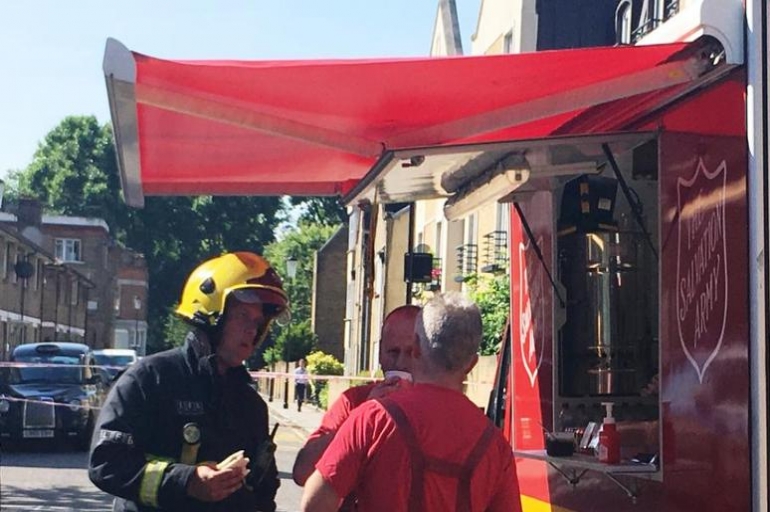 June 14, 2017: The Salvation Army has been responding to the horrific fire that broke out at Grenfell Towers in West London (UK) during the early hours of Wednesday morning. Volunteers from the church and charity across London have come together to support the city’s emergency services as well as people directly affected by the tragedy.

Today, The Salvation Army, has launched an appeal in response to the overwhelming offer of help from members of the public across the UK who want to contribute to its efforts in supporting the emergency services. Details can be found online at www.salvationarmy.org.uk.

In West London this morning, volunteers mobilized two of The Salvation Army’s London-based emergency response vehicles, (canteens) arriving at the scene at 3am following a request to support the coordinated effort from the London fire service. They have been, and continue to support well over 500 members of emergency service crews including firefighters, police officers and the ambulance service as they work tirelessly in the community.

It is expected that at least one of The Salvation Army’s emergency response canteens, manned by experienced volunteers and stocked with refreshments and food, will remain on site at Grenfell Towers until tomorrow (Thursday) and possibly Friday. They will be offering emotional support to all emergency service crews and providing guidance to members of the public looking for places of rest and safety.

In addition, as part of the coordinated local authority response, The Salvation Army’s corps in Notting Hill (205 Portobello Road, W11 1LU) is now open as a family rest center for members of the public who are concerned about family and friends. The center will be operated by a team of Salvation Army volunteers.

Donations to the appeal will help The Salvation Army continue to operate its emergency response, which supports emergency service crews day and night. Donations will help to stock its vehicles with food and drink, support volunteers and help keep centers open to the public in times of emergency.

Captain Ruth Gray, who with her husband Karl, has been co-ordinating The Salvation Army's emergency response on the ground, said: "We have an understanding with the fire brigade, who asked us to come and support at this tragic incident that happened early this morning."

“We drove to Shoreditch Fire Station, where our emergency response canteen is located, and that is permanently stocked with food - chocolate bars, chips and cans of pop.  We picked up items for sandwiches on the way from local shops so that we can support the emergency services and anyone at the incident who needs our help."

“It is horrendous. I have never seen anything this tragic. People are really glad to have someone be kind and offer them a cup of tea, someone who is just prepared to listen to them.”

Major Paul Scott, Salvation Army officer at Notting Hill said: “The community spirit is wonderful. Right from when it happened straight away it was amazing to see the community springing into action. We are now one of four reception centers - we are specifically open for families in need offering tea, coffee and snacks. We have been inundated with people bringing us donations for those who have been affected by this dreadful tragedy.”

Captain Ruth Gray asks that people keep those affected by this incident in their prayers. She adds: “People have witnessed things they would rather have never seen. People can pray for the people who will provide long-term support. People have been made homeless, their homes have gone and how people deal with that I don't know. We pray that people find hope in a really horrendous situation. We pray for those who have lost loved ones. And we pray for the emergency services who continue to work so tirelessly.”

The Salvation Army runs a number of emergency response teams across the UK, which offer support to our emergency services with on-site refreshment and emotional support, and by directing individuals who are affected by incidents to care or rest centers.

The Salvation Army’s UK based emergency response vehicles attend between 170-200 call-outs per year.