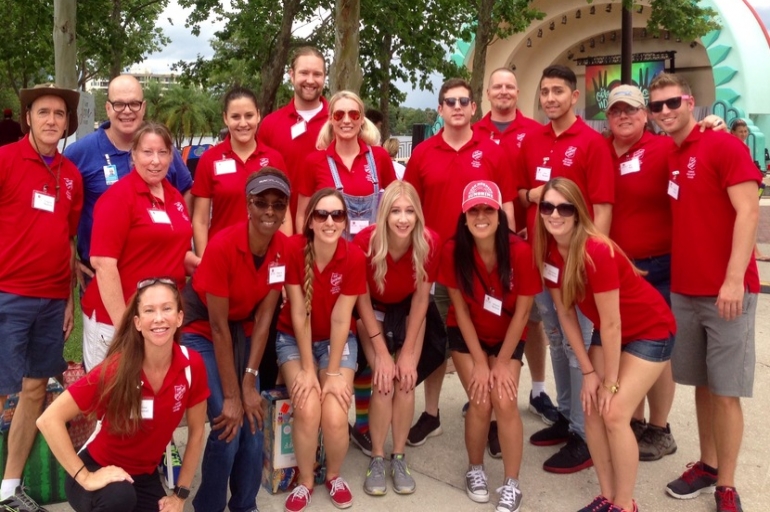 Orlando, Florida - Thousands of people braved the rain to honor the 49 who were killed and dozens wounded at Pulse Nightclub on Monday, June 12, 2017. Monday marked the one year anniversary since tragedy struck the Pulse Nightclub near downtown Orlando.

The City of Orlando and Orange County Government, in collaboration with Pulse, jointly designated June 12, 2017, as “Orlando United Day - A Day of Love and Kindness.” A number of events took place for Orlando United Day and the local Salvation Army volunteered its services to offer water plus emotional/spiritual care at Pulse and Lake Eola.

As the sunrise painted across City Beautiful, volunteers Bill and Grace Sweet with a team of six people worked energetically to prep Orlando’s mobile feeding unit for operation. The morning team dedicated a total of 15 hours serving people gathered to pay their respects, mourn, remember, and unite.

“It was an extremely moving experience to see people appreciate a cold bottle of water,” said Bill and Grace. “Tears still fill our eyes when we think about serving first responders’ sandwiches only a few hours after last year’s tragic event.”

“While walking around Lake Eola I could feel the underline of hurt and pain,” said Janet Tackman, Salvation Army Volunteer. “Many of the people I encountered throughout the day stopped me to say thank you for everything The Salvation Army has done.”

Since June 2016, The Salvation Army of Orlando has assisted approximately 386 individuals directly connected to Pulse with grocery orders, gas cards, rent, mortgage and utility assistance. Social services and emotional/spiritual care will continue to be offered to individuals affected regardless of race, gender, ethnicity or sexual orientation.