Birmingham Salvation Army Serving After Tornado from Remnants of Cindy 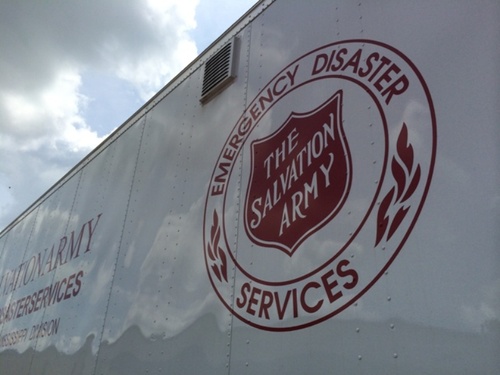 BIRMINGHAM, AL – The Birmingham, Alabama Command of The Salvation Army will serve meals Thursday evening after a tornado tore through several communities in and around Birmingham. This comes as Emergency Disaster Services officials warned residents of the threat of flooding and tornadoes after Cindy was downgraded early Thursday to a tropical depression.

“Emergency officials asked us to serve meals and drinks in Fairfield and at the local EMA center following this storm,” said Major Roger Glick, Commanding Officer, Birmingham Area Command. “We will also provide emotional and spiritual care to those who need someone to talk to, a prayer, or even just a hug.”

The Birmingham Area Command will provide meals and drinks to the Jefferson County Emergency Operations Center and to a mobile command center closer to where the tornado touched down in the city of Fairfield. Disaster workers will be on site until 10pm Thursday night.

“Cindy is still a threat as it moves northeast across the top of our area,” said Terry Lightheart, EDS Director, The Salvation Army of Alabama, Louisiana, and Mississippi. “We know with projected rainfall from this storm more flooding could still be a possibility into the weekend. Many areas of the Division are also under a tornado watch or warning."

With Salvation Army Corps located all across the Gulf Coast from Mobile to Biloxi to New Orleans and Lake Charles in Louisiana, officers will stay in close contact with local emergency management officials to make sure all needs are met. Shelters are also open to receive anyone who needs to escape rising flood waters.

“So far the impact of Cindy has been localized but Divisional disaster relief personnel and assets remain on standby until remnants of the storm have passed."said Lightheart. “We would rather be prepared and not be needed than be caught off guard.”