The Salvation Army of Canada Responds to Wildfires In British Columbia 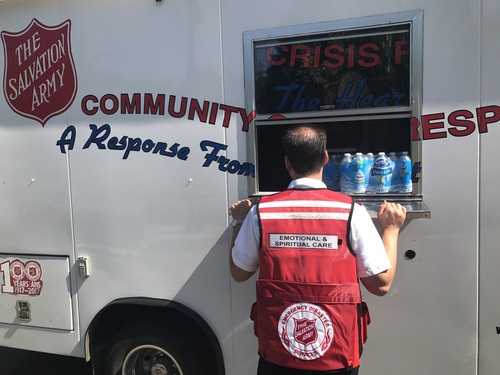 Toronto - “As wildfires rage in British Columbia's interior, The Salvation Army’s Emergency and Disaster Services is on alert to provide fast, efficient service to first responders and those impacted by the disaster,” says Lt-Colonel Brian Venables, Divisional Commander. “The Salvation Army’s established and well-rehearsed emergency protocol allows the organization to offer practical support such as food and water, as well as emotional and spiritual care.”

With more than 14,000 people already evacuated, Salvation Army emergency response teams have supported several communities in the interior. In Williams Lake, a Salvation Army response team provided 1,750 meals over the weekend. Another team in Prince George partnered with local restaurants to distribute over 450 meals as thousands of evacuees continue to enter the city. In Kamloops, a Salvation Army team assisted an estimated 3,500 evacuees from Cache Creek, supplying hydration and emotional support.

An incident command team has been established in Abbotsford to co-ordinate and organizing the province-wide response to the disaster as well as for dispatching staff, volunteers, supplies and trucks to evacuation centres around B.C.

As The Salvation Army continues to provide assistance to those impacted by the wildfires, financial support from the public is encouraged. Donations can be made online at SalvationArmy.ca/bcfires or by calling: 1-800-SAL-ARMY.

“It is our mission to offer hope and practical support in the midst of challenging circumstances,” says. Perron Goodyear, Territorial Emergency Disaster Services Director. "We are grateful for all who partner with us to make a difference in communities across the country and in the lives of people impacted by disaster."